Paul Calvert chats to Kay Wilson about her traumatic experience, writing her memoir and going on to create The Yellow Brick Road project helping children in Israel. 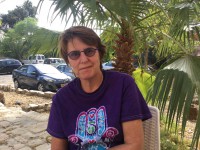 Paul: Can you tell us a little bit about your story?

Kay: I am a tour guide and I was guiding an American Christian friend. I myself am a British Israeli Jewish and we were on the Israel national trail on a Shabbat. It was a beautiful day and we were pounced on by two Palestinian terrorists and held a knife point for 30 minutes. They found my Israeli ID card which had the word Jew written on it and they tied our hands with our shoelaces, gagged us and took off my star of David necklace.

They then started to butcher me using Machetes. I fell on the ground, as they were stabbing me in the back and the side. The only thing I knew to do was to play dead. So I kept my eyes open and I watched in front of me my friend was hacked to death like a cucumber in front of my eyes. They leave, then they come back to make sure I'm dead, by turning me over and they stab me in the chest missing my heart by 4 mm.

I then have one last mission in life which is to actually get up and die near where I parked the car so that the police can find my body. I manage to stand and turn my back on what is left of my friend and I just begin to walk. Step by step I can see bones coming out of my side. I have thrown up behind the gag and it's like breathing through a straw.

In order not to think about my friend Christine, I started to compose this arrangement of "Somewhere over the rainbow", (I am a musician, a Jazz pianist). By doing this I managed to walk over a mile, gagged, bound and bare foot until I reached help.

I had 13 machete wounds in my lungs and diaphragm, over 30 broken bones, crushed sternum, broken shoulder blade, a dislocated shoulder and was rushed to hospital. It comes about a little while later that when they pounced on us I managed to stab one with my penknife, very lightly but that stab had his blood and his DNA on my sleeve which enabled the police to apprehend the murderers after only 2 days. They also confessed to murdering another Israeli woman 10 months before, called Neta Sorek. Nine months after the murder I was in court as they were both sentenced.

I think one of the most shocking things for me is that when the judge asked them, "But why did you murder an American Christian?" they just shrugged their shoulders and smirked saying, "Oh we thought she was Jewish". So that is my story.

Paul: How did you manage to survive something like this, would you call it a miracle?

Kay: I can be thankful. It's defied the doctors, they thought it was pretty amazing that I survived, let alone walked over a mile with my injuries. I don't want to apply some kind of messianic greatness to my own survival because somebody died, does that make God capricious? Does he favour me? Has he got a miracle only for me and not a miracle for Christine? So I just like to take the approach that I can be thankful that I have been awarded more time to do what I need to do.

Paul: How close to death actually were you?

Kay: I was nearly dead when I got to hospital.

Paul: And of course you lost your friend Christine, tell us a little bit about her.

Kay: I didn't know Christine too well, I had met her on a tour where I was actually guiding in Poland. I wanted to guide historical tours of the holocaust for Christians and Christine was part of a group at a certain death camp of the Nazis. I noticed she wasn't on the bus you and as the rooky guide I went back through this death camp and found her leaning against a memorial and she was reciting the Kaddish. The Kaddish is a prayer that Jewish people say. I said, "Look you should be on the bus, what are you doing?" and she says, "I am reciting Kaddish for your people". That was just so striking for me. I invited her to come to Israel for a long weekend and she arrived on the Friday and was murdered on the Sabbath (Saturday).

Paul:Who were your assailants, were they part of a political organisation?