The Shepherd's Fields At Christmas Time

Paul Calvert spoke with Hanan Manoly, the City Manager from the Beit Sahour Municipality, about the history of the area connected to the Shepherd's Fields, how they will be celebrating Christmas this year, as well as good news stories and challenges. 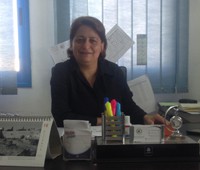 Paul: How important is the Beit Sahour Municipality to the community?

Hanan: The municipality is committed to the daily services that should be provided to the community. These daily services are of many kinds, such as infrastructure development, solid waste management, the protection of Government properties, public markets, the sewage network, surfaces, monitoring construction, licencing process of the buildings and the implementation of the projects that are generated from the strategic and development plan of the city. Also they are a big cooperation with the local community and the civic organisations. The municipality is also responsible for planning and economic development, so mainly they are responsible to develop the daily services in kinds and in quantity.

Paul: Does it take a lot to run the municipality?

Hanan: Yes of course, especially the municipalities in Palestine suffer usually from the financial crisis. There are a lack of financial sources, so they have to do big thoughts in order to be able to provide the people with the best kind of services in the city.

There is a very good relation between Christians and Muslims in Beit Sahour. They work together, celebrate together and plan together. Also there are very good family relations between both societies, but the majority are Christians.

Paul: What is Beit Sahour famous for?

Hanan: Beit Sahour is well known as the City of the Shepherds. It's famous because here in the shepherd's area, the first announcements of the birth of Jesus Christ was here. From here we have the shepherd's area when the angel appeared to the shepherds and he asked them to follow the star and to go to Bethlehem where they can meet the child Jesus Christ, in the Nativity Church in the cave, which is located now in the Nativity Church.

We are famous because we are considered as the second tourist city in Bethlehem. After Bethlehem we are famous for this story.

Paul: What can people see today of the Shepherd's Fields?

Three of the shepherds we are talking about to whom the angel announced the birth of Jesus Christ were buried in the west side of the cave and their tombs are still visible. Also there are many churches that were built over and inside the caves of the area.

Paul: Can you see sheep today?