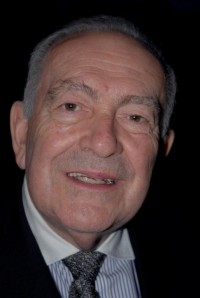 Dr Tony Stone is an evangelist based in Stourbridge, England. His mother was Jewish, brought up in an orthodox Jewish family, but became a Messianic Jew when she was 17. Tony carries on the story:

Tony: When she was about 17, she was walking through one of the local parks and there was a large marquee up; she heard wonderful singing coming from this marquee, so she went closer only intending to stand in the door way. Before she knew it she was actually sat at one of the seats at the back. It was a Christian Gospel crusade and for the first time she heard about Yeshua Jesus as a Saviour not just as someone in history. She had never ever heard of him spoken of in that way before and through hearing that message she yielded to the claims of Jesus and received him into her own heart and life and became a committed Christian.

Paul: How did her family respond to that?

Tony: It was a very difficult time for her because, being fairly orthodox they did not have any desire to see any family members going in that direction, so in the early days she suffered quite considerably as a result of that.

Paul: Were you brought up in a traditional Jewish household or a Christian household?

Tony: I was raised in a Christian home. My mother when she came to Christ went along to the local church and a Lay Preacher came along and that was my father and so I had a Gentile father, a Preacher, so I was raised in a very Godly home.

Paul: When you lived in London, you had a Jewish family who also lived on your street. I believe you have a story about earning money from them as a boy, tell us about that.

Tony: On the Sabbath they weren't allowed to do any form of work and so first thing in the morning on the Saturday I would go down to their house pre-arranged. They had already set the fire in the fire place, the paper, the wood and the coal and I would be the one to strike the match and to light it up and then later in the day my mother would go down and put the gas on under their food. They very kindly paid me for doing that. It was a regular Saturday job, so it was like pocket money.

Paul: You were saved at 11 years of age, how did that happen?

Tony: Well, as you can imagine, I was exposed to the gospel message for those 11 years really and I knew what it meant to be a Christian but I was depending on the fact that my father was a very well known preacher and my mother was a well known godly woman; then one Sunday night a preacher preached and I realised that God doesn't have Grandchildren, he only has children. I realised that I couldn't get to heaven on my parents faith and that I needed a personal faith. That night instead of it going in one ear and out the other it really touched my heart and I went forward and yielded my life to Christ and I've known ever since the joy of salvation that only Jesus gives.

Paul: This year you're celebrating 60 years in ministry, what sort of changes have you seen in the ministry in general?

Tony: Well, a lot changes, as there have been in every strata of society. I've spent my years mostly as an evangelist and of course years ago we were involved in crusades which would last for up to 2 weeks and we would get good crowds out every night. These days it's very difficult to get people to come out to those kind of events, our evangelism today is mostly going to where people are and reaching people almost through social events like coffee mornings, dinners and more of a cabaret style of meeting; there are many, many ways. The Gospel has certainly never changed in those years, it's still the same message but the means and the opportunities have changed.

Paul: You didn't start off your working life in ministry did you? What did you start off as?

Tony: I went first of all into an acting career and I trained a little in an acting school and then I was given the opportunity for small parts in films and so that's where I started. Then when I went into the army when I was 18 for my national service, that's when God really started to deal with me. I felt the call of God on my life to become a preacher.

Paul: Have you acted with anybody famous?

Tony: You go into a stable, which means you work with a well known actor, with very small bit parts, for 2 years I worked with David Niven who was a well known British actor.

Paul: So what would your prayer be for any Jewish person who doesn't know Jesus today?

Tony: Well, I would certainly invite and challenge them to examine the evidence. The more I read the Old Testament and in that sense the Jewish Bible, the more I realise there is so much in Jewish prophecy that one was coming who would be the Messiah. Then when I read the Gospels, the life of Jesus, I recognise how he fulfilled every one of the Jewish Prophecies. I would really challenge my Jewish friends to examine the evidence before they make up their minds. I am convinced that they too will see that Jesus truly is the Messiah, the Son of the Living God.

Tony held a campaign in central baptist church Tredegar in 1982-83. He graciously took my wife and I out for lunch as I explored vocation with him.
I wonder if he remembers what was an auspicious occasion for me, one that didn't result in ministry with his team, but today I'm the rector of Lostwithiel Cornwall!

I have heard Tony preach twice at Zoar Methodist Chapel and been blessed on both occasions. Convicting, Convincing and Converting. 'They shall still bear fruit in old age. They shall be fresh and flourishing.' Psalm 92 v 14.

Good interview, I remember Tony Stone at Ulverston Christian Camp 1980 where I met Christ as saviour and surrendered my life to Christ. What an introduction to christianity Acts of the Apostles style .I will never forget the boldness of the preaching to this day. Thank God for Tony Stone one of my early heroes of the faith.

Have heard tony preach on several occasions .. he is without doubt a mighty man of. God . We had the honour of being baptised by him In 1994 .

Thank you Paul for the great article. Dr Tony Stone is a very special man of God. I've met him in Jerusalem. Blessings, Lara

Dr. Stone's story was a moving one and similar o mine in a way. My mother was Jewish but she married a Christian, my father. It was he who insisted that we be brought up as Jews in order to heal the f\rift between my mother and her family. Today I live in Israel, working with the Emergency Volunteer Project that brings Jews and Christians together to help Israel's people in times of emergency - www.evp.org.il

A great book on British Messianic Jewish is - The Unusual Suspects by Richard Gibson, amazing stories of Messianic Jews today that everyone should read :-)
http://direct.crossrhythms.co.uk/product/The-Unusual-Suspect s/Richard-Hobson/54527

My Dad preached with Tony Stone in England and the US 1977-1980. He passed away this year. I wish I could contact him. I knew and played with his children.

Met Dr Stone in Belfast, a few years ago now and was very impacted with His ministry. Led my friend to Jesus on Sunday and gave her the little blue "What Next" book that Dr Stone had written for John Bevere Ministries, great tool and I know just one of many ways that God has used him to be a blessing to the body of Christ!