Why do we believe the earth is billions of years old? 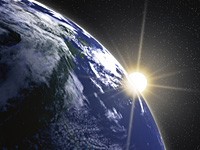 Professor Richard Dawkins had two hours of TV time in January, to say why we shouldn't believe in God. He told us science has proved that all life on this planet evolved, without any help from any kind of God.

What do we say when friends, workmates or teachers tell us the same thing? How can we tell them about God who loves them? Or should we just accept what these clever scientists tell us?

Professor Dawkins said: "How do we know that the earth is billions of years old and orbits the sun which nourishes it? The answer is evidence." So what evidence is there?

Sometimes people link two things together, which shouldn't be linked. For example, how do we know that the earth orbits the sun which nourishes it? The answer is, of course, evidence. We make observations and take measurements. We can easily prove that the earth goes around the sun. This is real science. I like to call it operational science. It is the type of science we do in the laboratory. We can do it again, and it will still be true.

Was anyone there to see the earth made billions of years ago? No! That is not operational science. We cannot do it again! Rocks don't have dates stamped on them. Instead, scientists measure amounts of chemicals that are in the rock today, and, making some big assumptions, they work out what they think happened in the past. Different assumptions give different answers! Many assumptions give answers which agree with the Bible!

Why believe what atheist scientists tell us? They weren't there to see it happen. Why not believe what God says in Genesis-after all, He was there! Many serious scientists now believe Genesis, rather than billions of years.

Listen again to Ken Ham, Founder of Answers In Genesis, an hour special on the Creation/Evolution debate.

Schroeder is an unsaved physicist besotted with the Kabbalism of Nahmanides, not a Scripture scholar. His absurd gymnastics are refuted at http://www.creationontheweb.com/content/view/3882/.

The big problem with long age views is the origin of death and suffering. The Bible says they are ultimately the result of Adam's sin, while long-age ideas make death, "the last enemy", part of a creation He called "very good" -- see The Fall: a cosmic catastrophe.

Neil Gussman, how about Michael Faraday, the father of electrical inductance? If the Nobel Prizes had been conceived slightly earlier then they were he would have swept the board.

I am a musician, which is of course the purest kind of scientist. I personally don't believe that the account of creation in Genesis is literal, nor that its original readership believe it was literal. Rather, it is an account that tells us all we need to know about God, us and the devil. 1)God's a loving creator. 2)God made everything perfect. 3)The bad things in the world are a result of our bad choices.

God also reminds Job that Job wasn't around when the Earth was made so not to think he had all the answers. Good point God.

Andrew- your answer contridicts itself. You don't believe in the 6 day creation because it's not literal as you say... but your willing to believe the book of Job in which God scolds Job telling him: Job 38: 2. Who is this that darkeneth counsel by words without knowledge?
3. Gird up now thy loins like a man; for I will demand of thee, and answer thou me.
4. Where wast thou when I laid the foundations of the earth? declare, if thou hast understanding.

God's point is you were not there, YOU do not know what I did but if you think you know then you tell me. This is basicly God saying ok if you know it all then you tell me what I did. Typical of man to attempt to lift himself above God. To say God could not have created the earth in 6 days is the same as saying with God nothing is possible. There are so many references of God's planning throughout the Bible that to dismiss 6 days as a falsehood one should trash his/her bible and take your chance that God doesn't exist. To do less is to MOCK God. Perhaps you need a good qualified Bible teacher to study with so that the WORD can be more enlightened. Or consider Romans 8:5 "For those who live according to the flesh set their minds on the things of the flesh, but those who live according to the Spirit, the things of the Spirit. NKJV Again consider Romans 1:20 For since the creation of the world His INVISIBLE ATTRIBUTES* are clearly seen, being understood by the things that are made, even His eternal power and the God head, so that they are without excuse. NKJV *emphasis mine.

As somebody who studied Sport Science and human physiology at university, I was dismayed at how fellow students accepted evolutionary explanations, despite the fact that no evidence was ever given to support these assertions. Many people accept evolution as being a fact in today's society without ever questioning the evidence behind it. Having read many of AiG's publications, I welcome their efforts to make people question what they have accepted as being true. This can only ever produce 'better science.'

I have studied and debated evolution and how the earth came about many many times with other Christians and atheists.

I agree with Chris (above), our human understanding and judgement is flawed. We have real problems dealing with what we will NEVER on this earth comprehend - we have theories at be. I now research cell biology and I am looking at the processes involved in cellular apoptosis (programmed cell death)... it's funny, you would think the more I learn, the further from God and closer to science I would become! not so the case! I'm utterly convinced God alone is behind it all.

I bet you Genesis made a lot of sense when the Earth was still flat!

Nobody mentions the history of how Lyell managed to link uniformitarian geology(m. of yrs.) with Darwin's ev. theory. This gave the credence for ev.
Everybody believe catastrophism before this, and the real evidence for the global flood is clear for those who do not allow themselves to be indoctrinated. The Church has a lot to answer for in believing atheistic 'science'. Even ev. ists now believe in catastrophic rock formation.
I challenge people to look at all the evidence.

I am a molecular biologist and have studied evolutionary theory and the genetics behind it in great detail. And you know what? Evolution, like life in general, is beautiful, intricate, complex, perfect! The more detail we study, the more amazing it is. I see God's hand in genetics, in evolution...chance could not have made it as glorious or intricate.

I think what he meant is you cant make a formula to create the universe again, which I for one think is perfectly reasonable... to be honest, science knows ALOT less than it thinks it does simply because its based around human understanding which in its very essence is flawed, sure, you cant sum up a full argument in the time that this guy tried to, but its the basis for a much bigger argument which for me makes perfect sense.

None of the ways of dating the planet discount God.
Firstly, who says that Earth as we know it has to have been around since the start of the world.
Read Gen 1:2 does that not indicate that the rocks on this planet, the dust, could have been around for many millennia prior to creation?
The more I learn of Physics the more I am adamant that God exists. Picture the atom, something so amazingly complex, could that have formed itself?
The big bang: An explosion formed all matter from something amazingly small and dense. What is there to say God could not have instigated this explosion?