Where The Lost Things Go

Jeff Short chats to Lucy Berry, about her new book based on Mary Poppins' return and how it can relate to Lent 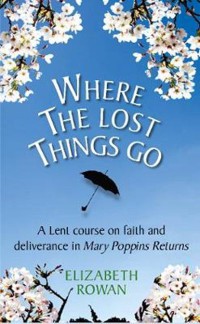 Jeff: What made you write this book?

Lucy: Well, the first thing was, I was asked to. I was really quite sceptical whether I could do it because I thought gosh; this is very light and fluffy. I'm not going to be able to say yes. And I had a really good look at the film and I began to understand that probably we could. I was worried because it was Disney and I was thinking Disney doesn't do deep and Lent is about the deepest you can go, isn't it? The more I looked into it the more I saw that it is not a typical Disney film at all. It starts with a light being extinguished; that's the very first image, which is quite a dark image. Although it's an odd film and I don't think it's particularly satisfactory as a story it's really interesting from several points of view. I think Disney loses hold of the story line and other things get in which is quite fascinating to me.

Jeff: Part of the back story to it is you say you approach every story believing that God is present in it, whether or not the story teller intends it to be or not. You quote Philip Pullman and his Dark Material stories.

Lucy: Yes, that's true. I think it's fascinating that the more Pullman says, the more Pullman works hard on the idea that church is dangerous and religion is fatuous, actually the more he draws God to our attention and makes us think carefully about religion. He's not doing us down really and Richard Dawkin is doing us a favour as well.

Jeff: For each of them it's a bit like saying don't think about an elephant, then it's hard not to. What can Mary Poppins' Return teach us about Lent?

Lucy: I think if you can put some of the themes alongside the themes of Lent I think that's a way of looking at the film from the point of view of do we believe what we see. Looking at Mary we can't. We're not quite sure whether she's real or whether she's magic. People coming to Jesus for the first time have both those questions. Is he real? Is he magic? What's going on with the temptations? Is he being asked to embrace magic? What's the difference between magic and miracles? That winds its way through the conversations in the book. The themes are huge. There's being lost, in every sense of the word. That's a very, very big theme and of course it's a huge theme for anybody with doubts about faith or wandering about in their own wildernesses.

Jeff: One of the studies is exploring change and loss, the heading is 'this can't be happening.' That's what chimes with me. I meet so many people who have experienced loss and are struggling to come to terms with it. Initially, when you hear the idea of the fluffy Disney story you don't imagine this book is going to take you to these places. You look at change, letting go, the sentimentality, the Mary Poppins song Where the Lost Things Go, against a genuine spirituality.

Lucy: There's one really important, really authentic song in the film, I'm not going to tell you which one it is, you're going to have to watch the film and read the book. But there is one authentic song in amongst quite a lot of flim flam and it is completely truthful and quite painful and very, very beautiful. It's in amongst this other Disneyish style. These things are operating side by side. It's almost as if there are two films going on, one which is saying quite serious things - also about money. There's a huge amount where Disney is trashing the idea of money but making an awful lot of money while it's doing it. That's interesting.

Jeff: There's great irony there. Another thing you pick up is about being lost, which you say is a recurring theme in the bible. The wilderness - you liken it to the fog in Mary Poppins.

Lucy: Yes, that's right. And there are all sorts of loss going on. One of the principal characters is tremendously lost. He has lost somebody important to him and the family has too. And he's emotionally lost, spiritually lost. Then there's this other character who's not lost at all and takes them through the fog. It's the nearest thing to a saviour character that we've got.

Jeff: I thought that was fascinating, I'd not seen that but I could see in that the nearest thing you would get to it. Fittingly for Lent, and moving towards Easter, looking at things like light and darkness and hope.

Lucy: Yes, that's right and it's so nice because there are very dark images and the film is set during the Depression so there is the idea of lights going out and also the idea of it being a very dark time for people is moving through the film. I think it's a departure from the usual way of looking at things so instead of it just being a fairy story it is more of a real story. It's got lots of jumping about and cartoon animals in it but if you watch the two almost in parallel it's fascinating because I don't think Disney had a complete handle on what they were doing. They've turned out two films in one in a way.

Jeff: That's a lovely thought. How long did it take you to compile the course and the book?

Lucy: I didn't have much time because they came to me and said would you like to do it and I had to think quite quickly. Something like 8 weeks. In a way you'd rather have longer but sometimes the push of getting it done and sending it back and the publisher going nearly, nearly and you have another crack at it. It's more exciting that way but it's a bit scary.

Jeff: I don't know about Mary Poppins flying, it sounds like you're flying by the seat of your pants on that.

Lucy: I was a bit, but it was enjoyable.

Jeff: Who would you like to pick this book up?

Lucy: Thank you so much for asking me this question. I think there are two lots of people. There are people who can look at it and think oh, that is so pretty, cos it's a very pretty cover; it's extremely pretty and it's actually almost at odds with Lent. The cover is almost a resurrection cover in that it's all blossom whereas this is a Lent book. So I think there are people who will pick it up because it's pretty. And there are people who are going to be thinking there is no way on earth that there can be anything worth looking at in here because it's too pretty and I just hope they go that little bit further and look on the back at what the blurb says. It's a deceptively pretty book. There are some very interesting things going on in the film and I hope in the book as well.

Jeff: In many churches Lent is a time when people will get together in house groups and it would be a wonderful course for them, I've no doubt about that. But also an individual could pick it up.

Lucy: Yes, as long as you'd had one good sit down with the film, or be prepared to maybe have a look at it again if there was something that you couldn't remember, I think that to be able to do it quietly on your own would be quite nice. I've written prayers for every session; if you're in a contemplative mood I think it works.

Jeff: I think it does. I think some of the prayers you've written, maybe because there is that poet within you, are lovely. You've written 'Lord, you said the truth would set us free but we don't much like truth; we don't like the pain and the muddle which you watch and heal unsqueamishly.' Those are very powerful words. If somebody comes to it thinking we're going to have Mickey Mouse, Disney this is real life, isn't it?

Lucy: Yes. I'm glad you said that because that is what I was hoping to achieve. Thank you.

Jeff: Well, I think you have, we finish with light, darkness and hope. When I first read the press release it said we need the darkness of Good Friday before we can celebrate the joy of Easter and again those words are powerful and so true.

Lucy: Yes, we've got to go through that bit. If we try and jump over... I remember somebody once saying to me I don't see why we have to have the crucifixion; can't we just have the resurrection? And I'm thinking no; I'm afraid not. We've got all that wandering about in the wilderness then we get the crucifixion and the awful Good Friday. You can't have the joy until you've been through all the horror.

Jeff: Absolutely true. Are there any other projects in the pipeline for Lucy Berry?

Lucy: Hopefully, yes. Darton, Longman and Todd who are the publishers of Where the Lost Things Go have got a poetry book of mine waiting on the blocks. I'm also writing another one at the moment for myself but I'm hoping to publish it. It is about trying to be a Christian and how hard it is and how often we are trying Christians instead of trying, if you see what I'm saying.

Jeff: That is very good!