Though renowned as a blues virtuoso, there're plenty of other strings to the guitar of BRYN HAWORTH. The veteran was quizzed by Tony Cummings. 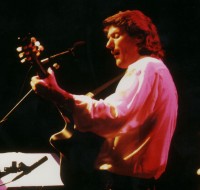 Bryn Haworth has been one of the mainstays of British Christian music for decades. A series of self-composed albums have cast him in the mould of sanctified bluesman and sensitive worship leader while his renowned virtuosity on guitar has brought him numerous engagements with many of the finest names in the world of pop and folk. Now with a new album out, 'Songs And Hymns', Bryn spoke to me at UCB's studios at Stoke-on-Trent.

Tony: I understand you had a problem over the title of your previous album?
Bryn: "A German company part-financed 'Slide Don't Fret'. Apparently, when 'Slide Don't Fret' is translated into German it means 'Do not fear to slide.' I got into terrible trouble because they thought I was promoting backsliding. The song is of course a novelty song about how to play guitar in the style of slide guitar."

Tony: Talking of slide guitarists, Sony have recently put out all the old Blind Willie Johnson tracks again. Do you know those recordings?
Bryn: "Yeah, I've got the double CD. What is so heartening for me is that the guy was a believer; a Christian and I think he is the best slide guitarist that's ever been. What's also amazing is that he was blind. If you try and play normal guitar without looking it's hard enough but to play slide guitar with your eyes closed is VERY difficult yet he's just a master of the instrument. And his vocals are so gravelly. It's wonderful."

Tony: In the '70s when you were interviewed for the Greenbelt Festival's Strait magazine, I think you shocked the interviewer when he asked you what you were listening to. I think he was expecting you to name some on-the-edge secular album. Instead you said the Maranatha! Singers.
Bryn: "In the early days there really wasn't much choice in worship songs. There were plenty of songs like 'This is the day', 'I thank God for the weather,' etc but if you had any depth of feeling for the Lord you couldn't really say it because there were no lyrics that were personal. The songs were all about God rather than addressed to him. Then I heard the Maranatha! Singers coming out of Calvary Chapel and there were these lovely, personal songs, 'I love you Lord and I lift my voice...' I'd never said, 'I love you, Lord,' even without music. And here was this simple song, which could help you say it. To me it was like a doorway to intimacy. It helped my relationship with the Lord. I would listen to those albums and learn the songs and play them in my room. And eventually it started creeping out in my concerts. Like maybe I would play one at the end of concerts."

Tony: What was the background behind your latest 'Songs And Hymns' album?
Bryn: "I've always used hymns, like I re-wrote the music for 'I Serve A Risen Saviour'. I love the depth and quality of the words. Especially if you read about the hymnwriters and find out about their lives you think, 'Boy, the stuff these people have been through,' it's just horrific some of it. Yet this sweetness and steadfastness comes out of their lives, it's like honey coming out. Also, for my generation, I'm 50 now, there's a lot of people who've been brought up with some kind of Christian background who recognise these tunes, they've heard them since they were children. I've noticed that people who are my age, especially people who aren't Christians, are very responsive to these songs. To hear them in a new way possibly brings them closer, maybe gets them thinking about the old ways, old truths that they're gone away from. If I go into my room and I want to worship God for his faithfulness, I'II sing 'Great Is Your Faithfulness', because it just says everything I want to say and more. It just says it."

Tony: Tell me about some of your compositions on 'Hymns'.
Bryn: "There's a song called 'Jesus The Man' which I wrote after reading a book by Philip Yancey called The Jesus I Never Knew. It brought me back to looking at the humanity of Jesus - he cried, he shouted, he obviously liked to eat out... The person of Jesus became much more real to me. Another song with an interesting story behind it is 'Praise The Lord'. I went to bed and was asleep...I thought. It was like in a dream, and I was in this stadium and it was full of men all singing this song 'Praise the Lord, praise the Lord.' And I thought, 'What a great song this is.' When men sing, and there were thousands of men singing, it has such strength and vigour to it. Then I realised that I was half awake and I thought, 'Oh no, I've got to get out of bed and put this down.' So I rolled out of bed, went next door and sang something into a cassette player that I hoped was what I was hearing. I got up in the morning and there it was, the whole of the chorus, words and everything were there. It was a real gift from the Lord. I've had a few like that over the years."

Tony: Tell me about the actual recording of the album.
Bryn: "Well, in 1974 I was on a label called Island and I was put on tour. In those days you were asked to support everybody, so I supported Bad Company, Traffic, Fairport Convention on long tours. So I opened up for Fairport Convention on a couple of tours and actually sang a song with them. I remember singing 'Cigarettes And Whiskey And Wild, Wild Wimmen'!
(Laughs) I didn't see them again for years. Then I met Dave Pegg at Heathrow Airport, they were flying off to Prague and we were going somewhere. And he said, 'Would you like to come and play at Crockerdie.' I didn't know what that was. Dave said, 'We have this big festival every^ year, quite a few thousand people.' So I said, 'Yeah, that would be great.' So I went and played Crockerdie and did a couple of songs with Fairport. So when I came to record this album I thought of the Fairport's studio. I was going to do 'Slide Don't Fret' there but it didn't work out. So I approached Dave and said, 'Look, I want to do an album but it's a hymns album, it's a religious album.' (Laughs) I thought I'd test the water and see if he responded. He said, That's wonderful, can I play on it?' I said, 'Yeah, sure.' Dave said, 'I love all those hymns, I know the whole Methodist blue book because I was brought up in the Methodist church.' His father was a lay preacher. And he knew every one of them. So we did the album in three weeks. I used Chris Leslie from Fairport on one track and Dave Pegg on a couple. It was just a great experience, it was really nice being in their studio."

I've had a few like "Praise the Lord" come like that too. It's a wonderful way to bypass the brain and get the whole download from above.