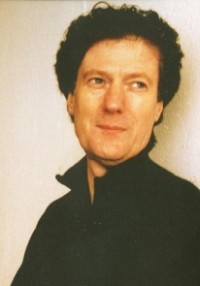 I have never been fortunate enough to be a big concert goer over the years but I have certainly been more than content with those I have seen. If someone were to ask me my favourite concert, I couldn't do it. I tend to put concerts into categories: best light show; best musicianship; most entertaining; etc. So what is the most spiritually uplifting concert I have been to. Easy. 1985, Guildford Baptist Church. My wife (then fiancÃ©e) and I went to see Bryn Haworth. The memories are still there of a wonderful evening of electric blues guitar playing culminating in an intimate time of worship.

So when we heard that Bryn Haworth was coming to Plymouth (does anything good come to Plymouth?), nay, to our home town of Plympton, we needed no persuasion whatsoever to go see him again. If someone is worth seeing, they're worth seeing regularly!

Tonight was going to be different from the last time - that was clear as soon as we arrived. No electric guitars this time. Two acoustics waited up on stage. My church worship leader had already worked out their values by the time we arrived. It wasn't until after the concert that I was reminded that Bryn had been unwell recently. My impression was that he had worn well in the last 21 years,
instantly recognisable as he stood at the back of the Methodist church. He took to the stage and to break the ice asked us what we normally did on a Saturday night in Plymouth. Not a lot I think was the general consensus. Us Plymouth people clearly need to get out more, but with more nights like this I'm sure we would.

Tonight was unashamedly going to be a blues night. The sound generated by those acoustic guitars was staggering, assisted only by Bryn's drum machine on some of the songs. The man looked in good shape and his playing was extraordinary. He opened with his own reworking of the 1930's hymn "I Serve A Risen Saviour", which superbly set the tone for the evening. This was followed by "Didn't Do Me No Good" as Bryn started to work on the audience participation. It was the first of a set of more surprising inclusions which got that really going, as he shared about his early life as a musician and went into "Summertime Blues".

The concert was part of Bryn's Keep The Faith tour in support of the album of the same name. A number of songs from that album were showcased including the title track, "Everybody Wants To Go To Heaven" and "New ID". All of those were clearly Bryn-stamped and showed that the years have not done any harm to his ability to write and to play a good tune.

His famous slide guitar was to the fore as well, instrumentally on the Mahalia Jackson number "Only Believe". Generally Bryn shared gently and with good humour about his career, his testimony and shared the good news very simply and invited a response. I read something afterwards about him being an all round nice guy. That sums him up very well. The concert did get briefly into worship mode with the classic "What Kind Of Love Is This" with a very different arrangement and to me the instant pick of the new songs, "Wings Of The Wind".

With a somewhat tenuous link about how we need to ask God's help, he launched in to the Beatles' "Help" and tenuous link or not it really worked. Earlier he included the old standard "People Get Ready", a song included in his live performances for many years. Having heard many people sing this over the years it was great to hear someone singing it who actually believed what he was singing.

The last of the cover versions, and the one which surprised me the most. Ever since I first heard "Spirit In The Sky" on Larry Norman's 'Streams Of White Light' album exposing so called spiritual songs I have always given this something of a wide berth. How could Bryn sing a song with such obviously dodgy lyrics? I needn't have worried. He changed them. "I'm a sinner, everybody sins, but I've got a friend in Jesus." Beautifully done.

Other songs (that I can remember) included "Good Friend", "Nobody To Blame But Me", "The Glory Zone", the autobiographical "Cajun Song" and "I'm Grateful".

Being a man of a certain age who remembers Bryn in the '70s and '80s (and I wasn't alone as a number of people were standing at the CD table talking about their Haworth vinyl), I did hope that Bryn would play some of his vintage stuff. He didn't, and whilst I would have thought I would have been disappointed by that, the quality of the music and the whole atmosphere of the evening meant that I was not disappointed in any way. It was a great night out. True, my church worship leader went home feeling depressed, but great guitarists do that to you. He can be encouraged at Bryn's reminder that God loves guitarists as well as organists. As a modest strummer I was encouraged by that too.

It was Bryn's first visit to Plymouth and I hope it won't be his last. It's not such a bad place is it really? And where else can we go on a Saturday night?

To Miles -
Yes, Scriptures tell us (Romans 23 v 23/24) we're all sinners.
Easy to kid ourselves, but no escaping it.
How amazing then that Jesus sacrificed himself on the cross for us.
Bryn Haworth is right - 'I've got [we all can have] a friend in Jesus.'
Once a sinner, now redeemed!

""I'm a sinner, everybody sins, but I've got a friend in Jesus." Beautifully done"

How wonderful it is to be told I'm a sinner.

it sounds like a really good concert. as i live in plyomuth i wish i had gone to see it. it's a shame i missed out. i hope that Brynn Howarth comes to plyomuth again some time. but for now this reveiw tells me what to expect and i'll definitely be going next time i hear bryn howarth is in plymouth

Hiya daddy, i love you. U rock!

PLEASE CAN HE DO SOME REVIEWS ON REBECCA ST JAMES

sounded a great concert, Bryns coming to stapleford soon and after reading that I can't wait
His concerts have always been spot on, a good bloke whose love for God shines through.