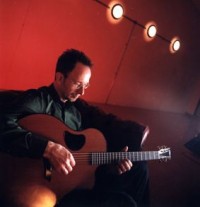 Song: Shine Jesus Shine
Composer: Graham Kendrick
Definitive recording: Graham Kendrick - 'The Very Best Of Graham Kendrick: Knowing You Jesus'
Lyric:
[verse]
Lord, the light of your love is shining
In the midst of the darkness, shining
Jesus, Light of the world, shine upon us
Set us free by the truth you now bring us
Shine on me, shine on me.

[chorus]
Shine, Jesus, shine
Fill this land with the Father's glory
Blaze, Spirit, blaze
Set our hearts on fire
Flow, river, flow
Flood the nations with grace and mercy
Send forth your word, Lord
And let there be light

[verse]
Lord, I come to your awesome presence
From the shadows into your radiance
By the blood I may enter your brightness
Search me, try me, consume all my darkness
Shine on me, shine on me

[verse]
As we gaze on your kingly brightness
So our faces display your likeness
Ever changing from glory to glory
Mirrored here may our lives tell your story
Shine on me, shine on me

"Shine Jesus Shine" (also known by its first line "Lord, The Light Of Your Love") is surely to be considered a classic. It was voted 10th in a 2005 survey conducted by the BBC's Songs Of Praise of the UK's favourite hymns. It was sung at the Dunblane memorial service. It's been used at Billy Graham crusades. It became one of the "folk songs" of Spring Harvest lore. It stayed at the top end of the Church Copyright Licence charts both in the UK and USA for a decade. Even the Pope has swung his cane in time to the music! But "Shine Jesus Shine" has also been vilified by a wide range of critics. Damian Thompson, editor in chief at the Catholic Herald, called the song "the most loathed of all happy-clappy hymns" while in his book 50 People Who B*gg**ed Up Britain newspaper columnist Quentin Letts devoted one of his most scathing chapters to the song's composer, Graham Kendrick, calling his most popular work "gloopy nonsense".

The truth is, of course, that "Shine Jesus Shine"'s bright and triumphant melody and Christ-centred words, coupled with its huge popularity amongst evangelical Christians, have made it an easy target for staunch Catholics like Thompson, high churchmen like Letts and liberal churchgoers irritated to see and hear a charismatic/evangelical anthem rise to such unparalleled popularity. When Kendrick's song made the Songs Of Praise top 10 hymns poll the veteran singer/songwriter showed commendable restraint when commenting on some of the criticism he and his song had received.

Writing in Alpha magazine Kendrick wrote, "Polarised views are easier to report and the spirit of the age thrives on division and provokes us to adopt adversarial poses. Thankfully pundits hoping to hear the clash of sabres between 'traditionalists' and 'evangelicals', or any other groups, were on the whole disappointed. I hope so! Without love and respect for one another surely whichever type of music we make is but clanging gongs and tinkling cymbals. The term 'happy-clappy' came up a few times as a derogatory dismissal of enthusiastic praise. Dismissive terms have the effect of drawing a line on the floor and expecting us to jump either side of it. Well I for one am not going to jump. If the happy-clappy label is being awarded then I hope I qualify! I will not apologise for following in the tradition of the apostle James (4:13), singing songs of praise if I am happy (and presumably clapping if I feel clappy). Mind you, please give me a label also for praying when I am in trouble, in the exact same tradition, of course, and for the times when I must weep with those who weep."

In the book Behind The Songs which Kendrick wrote with Clive Price, the singer/songwriter wrote about the origins of "Shine Jesus Shine". "At the time of writing it, Ichthus Christian Fellowship was focusing on the theme of the presence and holiness of God - the God who dwells in unapproachable light. I remember writing the three verses without the chorus and road-testing them. For some reason they weren't quite happening, so the song went back in the file for several months. Later, I came back to a phase of songwriting and I pulled it out again. I quickly concluded that actually this was not a complete song. All it had was three verses - and it needed a chorus.

"The phrase 'shine Jesus shine' came to mind. I think it was one of the quickest things I've ever written! Within 20 minutes or half an hour I'd written the chorus and the whole thing just needed a little bit of editing and tidying up here and there. The chorus fell into place surprisingly naturally. But even then it took a while to mature. I'd written the verses at a different pace. So the tempo of verse and chorus seemed to pull against one another. It was only through use that it actually began to settle down. As I worked on it with my band, an arrangement and a way of doing it took shape. Then it started to feel like a complete song. 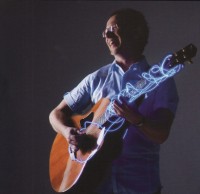 "It was used at Spring Harvest when it was still very new. And I still had no idea at all of its potential success. I'd written a whole batch of material during that time and there were other songs that I preferred at the time which are now long forgotten. I can remember singing it at Spring Harvest, where it became clear that much of the song's dynamics were in the content of that chorus. It's a prayer for the nation. Obviously I'd thought about it - I had the UK in my mind while I was singing it. But because it says 'fill this land', it's generic. So then I started meeting people from other nations who were saying, 'This is like our national anthem'. Whenever they sang it, they sang it for their own country. I was so glad that I hadn't referred to Britain or England specifically.

"It was one of those cases where people were beginning to catch a vision for God doing something on a national level. For my generation, such a widespread spiritual impact had almost seemed too big to contemplate. Decades of decline in the Church had produced a siege mentality and it had become quite hard to imagine the nation being touched by the Gospel. But faith was rising towards that, and the song was carried on a wave of prayer.

"'Shine Jesus Shine' was new and it caught the spirit of the moment. It was very Jesus-focused. Sometimes when I'm writing songs I ask the question of God, 'Can you endorse this song? Is there any reason why you can't put your stamp on it? Is there something about it that fails to expound the truth, exalt Jesus or offer an emphasis on something important?'

"I am always painfully conscious of compositional or lyrical shortcomings in a song - especially if I see them only when it's too late for changes. But I am also aware of how gracious God is to take hold of these faulty vessels and use them, and it's often the case that in the singing of a song, the Spirit of God turns up in a special way. Someone told me about a church in Australia that had become very dry. Very little was happening. But they picked up on 'Shine Jesus Shine' in its early days. The more they sang it, the more the Spirit of God started to move. I'm sure there were other factors involved, but the story goes that the song brought something new to them. At the very least it seemed that God turned up just when they were singing it!

"I find that fascinating. It's something you always want to happen but it's something you can't possibly manufacture. It's something God decides to do. I often wish that I had the knowledge to look into how music presses certain buttons in the heart and mind. But because I've only ever been a play-it-by-ear musician, I've always worked intuitively.

"Obviously there is some experience and wisdom that I've picked up along the way in terms of what makes a song work. But at its heart, I guess it's just me trying to do the best that I can and trusting that God is helping me and following it through until I have a complete song. A key part of my road testing is to submit songs to friends at Ichthus. Faith Forster has been a particularly helpful editor of songs. She and others often point out things that could be a bit clearer, or they help me when I'm stuck and don't know where to take it conceptually. All these things contribute to the songwriting process.

"Had I been trying to operate as an isolated individual, a great deal of this just wouldn't have happened. So I've been in a good place. That's not unusual. Many worship writers are based in a movement or church that has a very definite direction and all the checks and balances are in place to protect, preserve and provoke them. All those elements are vital."

One of the difficulties music buffs have had when faced with "Shine Jesus Shine" is that many renditions on record and CD are of a pretty poor standard. The original Kendrick album 'Shine Jesus Shine', released in 1988, has a production from Les Moir which today sounds decidedly dated while the composer's rendition with the All Souls Orchestra is all but unlistenable today. Even the versions by such diverse acts as Cliff Richard, the African Children's Choir, Chris Bowater, the Continentals, George Beverley Shea and many, many others have sounded distinctly dreary. Mr Kendrick himself finally recorded a good version of the song in 2010 on his 'The Very Best Of Graham Kendrick: Knowing You Jesus' album, thanks in part to American producer/arranger Nathan Nockels.

In 2006 Kendrick was asked whether he thought "Shine Jesus Shine" was going to achieve the popularity it has. He responded, "The honest answer to this is no, as at the time most people were writing short songs or choruses and this is quite substantial like a hymn so I didn't think it would be picked up as quick! The song was used and there seemed to be something special about it, but over the years it has developed its own identity."

I would like permission to print the lyrics to "Shine, Jesus, Shine" for a local ladies day of prayer. How do I do that, and who published this song? Thanks for your help!

The song is a Classic!