Nigel: I'd had many things in my journey which drew me to leading worship. I never thought I could be a person who leads a congregation in worship, because I don't play a guitar. Worship leaders strum a guitar, but I don't do that. It was my former pastor at Strandtown Baptist in east Belfast who said, 'Nige, I believe you can lead our congregation in worship. I believe you have the character and the sensitivity. All you need is to align yourself with somebody who plays the guitar, or a piano, and work with them.' In comes my best mate, Phil Hart, who is this finger-style guitar player inspired by Phil Keaggy. He was the drummer in my first band, Soul Response. We started to get creative with worship sets. We went through a phase of having an early service, which the church leaders were trying to make the same as the later service. But it never was the same. I think people appreciate something a bit more reflective at nine in the morning. We would arrange some acoustic guitar and whistles. It was a great training ground for me.

We started doing some men's conferences - various worship teams who liked a Celtic sound - and I ended up being invited to co-ordinate the worship team for FocusFest with Geraldine Latty, which allowed me to arrange music. But in the back of it all I had a longing to be a songwriter. I didn't think I could write songs: I'm not a lyricist. A revelation came to me one day after Geraldine Latty had been to Belfast and we'd had this humungous rehearsal. I was divorced at that time - I had a bad experience way back. Everybody left, back to their families, and this single guy who directed all the music was just giving thanks for what had happened. I turned to Psalm 92 and I started to play the piano. It was a gospely song, "It's So Good To Praise The Lord". It sounds like a basic music thing, but when I started to play the piano I realised that if I play something different on my left hand to the right hand it can sound quite gospely. I had written songs before that, but I'd say that was my first authentic expression of worship coming from my heart. I realised that I don't need to be a good lyricist: it's all in there, in the Bible, in Scripture. That's why I've developed a love for the Psalms.

Wind on a few years. I went to a financial adviser to sort out some finance problems. I was a civil servant. I loved my job, but it had started to define who I was; it was making it impossible for me to be away for longer than a week. I had a desire to be creative: I was into photography, I was trying to develop music, and there just wasn't enough time in the day. I went to him and he said, 'Have you ever thought of taking a career break? This financial stuff, it's peanuts. We can sort that out in no time. We could make that work for you. What about setting up your photography? What about writing those songs? What about recording an album?' He started dreaming with me. I was like, 'I couldn't. How could I do that?' He was like, 'It's really easy. Here's what you could have for a year to live on. Why not?' He spoke over me about, 'Your Heavenly Father is a rich Heavenly Father. He longs for people to express his creativity through the gifts that he has given them.'

I left that job behind in the civil service, took a career break - initially to start a photography business but realised that God had other plans. Number one, my mother had to have an operation - so I had a lot of time just to be there for her. Then I set up my photography business, but I discovered who I was. I discovered that I wasn't this business entrepreneur whose passion for photography was to make money from it. I realised that it was how I loved to worship. I loved to get out into nature, to spend time by the sea. I loved to see the sky when the sun's setting. Because of where I lived when I was on my career break, I used to go for these amazing walks round this island that I called my island. God started to speak to me about the beauty of his creation in really powerful ways for a period of maybe two months, again through the help of somebody giving me some counselling and advice to help me get into a rhythm. He said, 'Email me every day at 9.30 and tell me that you have gone out for your morning walk and you've had this time with the Lord.'

I was starting to slip into lying in bed and thinking, 'What am I doing here?' When I started to go out every morning for this walk, with the encouragement of this great Christian brother who was calling out of me something I didn't realise was in me, I couldn't wait to get up the next morning. All of a sudden I started to write this poem about sunrise to sunset, which became the song which inspired me. In the end I took a second year on career break with another bit of cashing in an endowment. The first year had been focused on my photography; the second year was songwriting. I used to sit in the church. I had a lot of freedom there just to play piano, to record little demos into the piano. I wrote maybe 50 songs in that year, read so many books, one of which I read time and time again, Don't Waste Your Life by John Piper. People used to come up to me when I was in a coffee shop reading this book and say, 'What are you doing there, wasting your life reading this book?' And I'd say, 'It's a really great book! It's all about God's best.'

I needed encouragement. I was full of all this self-doubt. I was yet to have a revelation that God loves me for me, for who I am; all the troubled stuff I've been through, he can redeem - he has such a bright future for me. The money was starting to run out. When am I going to do this album? I did not know. But in the meantime I decided to try and contact a few people. A friend of mine in Bluetree put me in contact with a record producer, a guy with a great heart called Paul Mills. He's produced Robin Mark and Bluetree. I didn't realise he is an amazing producer from Nashville. This guy, bless his heart, on a flight from Nashville to Belfast when he was recording Bluetree, he listened to all my demos. He met up with me for coffee for two hours and he says, 'Nigel, there's definitely an album in you. I really encourage you to pursue it. Some of your songs remind me of Elton John. They're different, there's so much variety in your writing. My advice would be to get together with your friend from Bluetree, and he could play the drums, he could surround you with some of his contacts. Make this album, show your hand as a songwriter. Maybe not all your songs are congregational. My challenge to you would be to get into Scripture and see if there's a nugget you can find that can give you a congregational song.'

I took all of his advice. The song of Moses in Exodus 15 gave me the most congregational song I wrote, which shares a title with Ol' Blue Eyes, "Start Spreading The News". The Message translation of the song of Moses is full of these amazing little phrases. Another friend got involved, a guy called Nathan Jess who's done really well for himself now, and I celebrate his involvement in this. I went to his house one day and asked him, 'Could you help me go through all of these little songs that I have and pick out what you think would make good songs for this album?' He did that and he was really encouraging. He played acoustic guitar on the album, and I ended up contacting his mate, Andy Dougherty, who had started this studio. 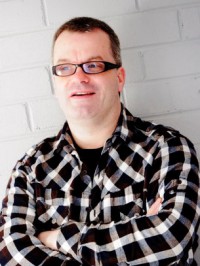 The story about having no money was amazing. Just at a time when my career break had run out, I really needed to go back into the civil service to earn some more money. They didn't have a job to give me, so I was completely at the mercy of God's provision. I tried to get some part-time work in Scripture Union. For another 18 months the civil service didn't give me a job, and in those 18 months a number of things happened. I went on mission trips, I've seen more of the world than I had done before - people sponsored me to go to these places. Then a miracle happened. A politician in Belfast had been pursuing this tribunal case. Peter Robinson had proved that civil servants of the lowest grades were historically underpaid compared to their equivalents in England. We all got compensation. I got a five-figure sum, and it was like, 'Right! I'm doing this album now, boys!' I had been looking for the right studio. A mate of mine had used this studio called Sonic Visuals, and boy, did I have the time of my life. I got the deal of the century. This guy nearly broke his business model when he gave me a price per song. That was not a good idea. He didn't realise what I had in mind.

Andy had a whiteboard. He had to make a spreadsheet with all the different things that we needed. He'd want to bring the mandolins, saxophone, different things. It was quite eclectic in some ways. As he started to rub out the things that we'd done, on the very last day we were in the studio - just before mixing - I got a phone call from the civil service to say, 'We've got a job for you. Do you want to start next week?' I needed to honour Andy for work beyond the call of duty that he'd done, so I went back to the civil service in another job, which was a bit boring. . .

Julie: Or open terribly wide doors. But that was fine. I loved doing the 'Balcombe Bridge' album, and I actually quite liked being hidden, to be able to go into little places and connect with people.

Julie: Yeah. Churches. We do Folk By The Fire - even house concerts. Lots of places. Up until 2012, I had two lives - a life as a musician and a life married to David, who was a Baptist pastor. We were in pastoral ministry, and being the mum of three very lively kids who were growing up and becoming teenagers. My music was fitted in around so many things. I did a lot of small concerts - churches and festivals - and it was mainly just me. My voice, my fiddle, a guitar and a keyboard. I'd do unaccompanied fiddle things. It was before the era of loop pedals or backing tracks, so I'd do this spinning plate thing, and it would just be me. I was managing but always yearned for people to play music with. All my dreams seem to have come true lately.