When 'Warrior Bride' was literally delivered to the door, we felt in so many ways God was bringing us together. I referred earlier to the fact that I hadn't fully realised who I was in God. It was during that time, during those long conversations Julie and I were having, Julie was speaking into my life about the busy-ness and recommended a book called The Grace Outpouring, which is one of the books that really helped me in my ministry. I'd never in my life heard the audible voice of God, and one night I woke up and found myself saying three times - and I felt it was God's specific word to me - 'My child, I love you and I accept you for who you are.' I needed to hear those words to go on this journey of adventure that I was going on. I was going to leave my comfort zone of Belfast behind. Everything: the orchestra, the worship teams, and all these people. God was calling me to leave Ireland and to go to England. The first step of that adventure was to Sussex.

How amazing to find, when I was starting to connect with Julie, and we got engaged, she introduced me to her mate [recording engineer and producer] Chris Smith at the studio she recorded 'Warrior Bride' and 'Father's House' in, Raindance Studios in Stourbridge. 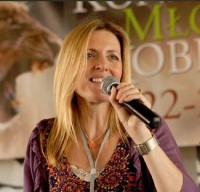 Amazingly, after sharing the vision for the kids' album with the Belfast church leaders and one who'd got it then all of a sudden became ill and it didn't happen, eventually it was one of the musicians who was in my team, a great bass player, his father met with me in town for lunch and caught the vision for the project. He said, 'I would love to sow into this album.' Fair play to the guy, he gave us this opportunity. It was almost a test for him, because for him it was about Belfast. For me it was about the songs, and about getting these songs out to a wider audience. So when I met Chris and we went to the studio with the nucleus of this idea, and these songs, we just hit it off. He caught it, and, in fact, the guy now does a lot of children's ministry himself. All the songs went through Julie's microscope of, 'What are you trying to say to these kids?' 'Do you really want to say that?' 'Maybe we want to think about that.' Actually, that project was delayed until the right time because the lyrics needed to go through another process. During that time of our engagement, and then getting married, that was the first project we recorded together.

Tony: Is Julie singing on it?

Julie: I sing on one of the songs, "I Want To Be Like King David". But we felt like we needed younger voices. Because it was an all-age album, we felt like we needed voices that children could relate to. We had a children's choir, but we also enlisted the help of my daughter and son-in-law, who both write their own songs and have absolutely beautiful singing voices - and very youthful voices.

Nigel: How gracious of God to give us this recording project to share my heart with Julie's daughter and son-in-law, and have them involved in it, their first experience in a recording studio. Amazing - wind the clock on - they have now released an EP, and we helped them finish it in the same studio. I just love the way God uses everything.

Tony: Did you record the 'Celtish' album at Raindance?

Nigel: Yes. But in between that, we started flowing with a Dutch worship leader friend of ours called Wytze Valkema. He's from the Netherlands, but he now has Irish grandchildren. Julie had been a long-time friend with him as a result of some ministry that her late husband David had been involved in, connecting European prayer leaders together.

Julie: But interestingly, Wytze was known to our friends in Iona, because Frank Van Essen, their drummer, is also Dutch and knew Wytze very well as a musician and had got Wytze playing on 'Another Realm'. He plays the shofars. It's actually quite a big world, but when God's involved he connects people from all sorts of directions.

Nigel: Wytze loves the Celtic sound and he writes big worship songs based on Scripture. We had started playing along with him at different prayer events in Brussels and in Poland. He had this desire to record some of his songs. He had tried to.

Julie: At that time we had felt like God was saying to us, 'Don't just concentrate on your own music. I want you to start sowing into other people's music. There are other people carrying these songs and sounds and they don't have the wherewithal to be able to record them.' Wytze himself had been in a studio and had a really bad experience. Someone had taken over his sound and it just wasn't him. We knew several people who had had the same experience, so we felt like God was saying, 'OK, you've done this project to start you off, but now I want you to start sowing into other people's music, supporting their music - find their sound.' Nigel was finding how all of his life he'd heard sounds and he'd heard production where he wouldn't necessarily say, 'That's the work of a music producer,' but actually that's what it was. So he was beginning to have the freedom and the opportunities to act as a producer. Wytze said to him, 'Would you produce my music?' We ended up with this huge album.

Nigel: The dream came about in Brussels when Wytze decided to put a name on this thing - the name for when we come together, Wytze and the two of us with our Celtic instruments - and decided to call it The Worship Company. It was just a name that we put on because we were starting to do worship in different gatherings with this Celtic sound - very free-flowing. He had this dream of recording an album, and as Julie says, we were really blessed to have someone help us record the kids' album and sow into that. We'd love to sow into someone else to have their songs produced. We started with just three days in the studio. This is the problem with the studio environment: worship leaders who have to flow out of their heart can so often get shut down in a recording studio. We longed to record this album in a way that Wytze would have total freedom in that studio. We did a little bit of pre-production, but only enough to say, 'We want to be able to go anywhere Wytze.' We had to create a way of doing that which was unusual, where he had to sing and play at the same time. We did it in such a way that he could respond to what we were doing in the live room downstairs.

We wanted a compromise between the benefits of live recording and the benefits of studio production. We didn't know if we could do that, but boy when Wytze got in and got comfortable, got his cans on - and he put his slippers on! I have never seen anybody deliver such a powerful performance. He's got this big Dutch voice. When you listen to the album, which is what we created - we ended up having layers and layers of David Bainbridge. The album is called 'Emerald Featuring The Songs Of Wytze Valkema' and it's credited The Worship Company.

Tony: Now as it's turned out, your best-selling project so far is the 'Celtish Christmas' album released last year and still selling. How did it come about?