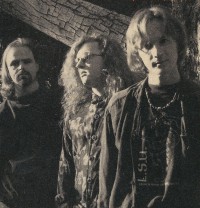 More than any other band, The Choir personify the Church's move into alternative rock. Since they first emerged in 1983 as part of Southern California's Calvary Chapel roster of artists the band - hinging around singer/guitarist Derri Daugherty and drummer Steve Hindalong - have clocked up 17 studio albums, three EPs, five live albums, a retrospective box set and both Hindalong (two albums) and Daugherty (four albums) releasing occasional solo sets. Now The Choir (down to three band members since the death in 2018 of bassist Tim Chandler) have released a flurry of singles. Said Daugherty, "The days of making a record every two years and doing a couple of tours are over. As older guys, we have to rethink our approach."

Their first 2019 single was a cover of Phil Collins' "In The Air Tonight". That was followed by an original song. Read a press release, "The group flexed its own songwriting muscle with the chugging pop of 'Mystical World', wherein Daugherty's guitars nod to the sounds of New Order, Modern English and Jesus & Mary Chain alongside a Dan Michaels saxophone line that sends love notes to Psychedelic Furs. Drummer Steve Hindalong's lyric celebrates life and love in a more mature version of wide-eyed wonder."

"Kathie's Garden" was The Choir's third single, "its summery acoustic jangle serving as a fond eulogy to Hindalong's beloved sister." Steve spoke about his much loved sister: "Kathie taught second grade for 30 years. One of her legacies was a garden that she maintained at her elementary school. She encouraged the children to get their hands in the dirt. Just like she cultivated the plants in her garden, Kathie cultivated the hearts and minds of the children in her care with tremendous love."

The band's fourth and newest offering is a reimagined version of OneRepublic's chart-busting 2013 single "Counting Stars". Said saxman Michaels, "The original was so stunning already. It was a daunting challenge to do something different with it that holds up." Daugherty added, "I thought about the celestial angle. The opening is full of swirling guitar, with all of these layers and weird backward lines happening. I was picturing the chaotic haze of the universe, and the beauty of it."

Hindalong added his thoughts, "Our version is more chill. My girlfriend's teen daughter said it sounds like we did the night-time version. I like that. I like that Ryan Tedder's lyric is mysterious and deals in contrasts. It's despairing and hopeful. What came to my mind is 'money can't buy you love,' so I immediately connected it with the classic Beatles tune. I also related because most of my songs are directed to one person. Listening to 'Counting Stars', it feels truthful and transparent. It's like overhearing a private conversation, although you may be unaware of the context."