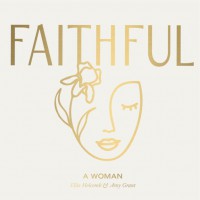 THE FIRST single from a multi-artist book/album project has been released. The song "A Woman" by Amy Grant and Ellie Holcomb is from the project Faithful: Go And Speak, published by Compassion International, David C Cook and Integrity Music. The Faithful Project came about when a group of well-known and respected authors and songwriters gathered as a community to write and share songs. Each of the 12 songs on the album features a woman telling the story of God's faithfulness throughout Scripture to the present day. The story of Mary Magdalene is shared in "A Woman" and was written by Holcomb, New York Times best-selling author Ann Voskamp and artist Sarah Macintosh.

About "A Woman" Ann Voskamp said, "Who knew that the deep, unspoken brokenness of so many years as a woman could be healed through this divine song that pulses with the heartbeat of the Father for His daughters. Who knew that the story, straight out of Scripture, of Mary Magdelene, set to song, could touch old wounds, change the refrain of a woman's heart beat now? Who knew how the heart was aching for the relief - and release - of this song? 'A Woman' is a song, a heart cry, a healing, for every woman."