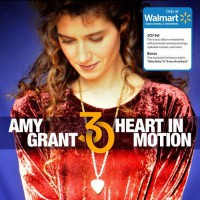 REFLECTING the worldwide revival of vinyl music releases the ground-breaking Amy Grant album 'Heart In Motion' from 1991 is being released in a two LP edition. The new album will have 16 bonus tracks including three never released in any other format. The US Walmart edition will be issued on 30th July.