Coventry's Speak, Brother back with single "Even Though We Are Strangers" 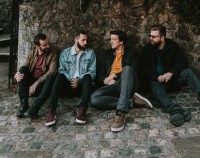 THE BAND who have been compared to Paper Kites and Mumford & Sons, Coventry-based Speak, Brother, are returning with a new single on 30th September. "Even Though We Are Strangers" takes as its inspiration "a moment on a mountain during the Three Peak Challenge, which the band took on to raise money for a charity helping orphaned children. The song tells the story of the unexpected discovery of a deep, instinctive bond between humans; a secret fire that burns within us all despite our differences."