God Is Not Finished 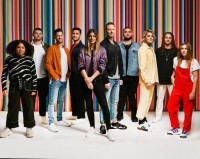 AUSTRALIA'S Grammy Award-winning Hillsong Worship is gearing up for the release of 'Awake', their first studio recording in almost two decades. It is released on 11th October. Featuring the vocals of Brooke Ligertwood, Joel Houston, Taya and Aodhan King, 'Awake' is comprised of 12 newly penned tracks. It includes three bonus live/digital versions of "See The Light", "No One But You" and the group's first single "King Of Kings", which continues to climb the charts with four million plus global audio streams and over two million YouTube views. Talking about the 'Awake' project, Brooke Ligertwood said, "We asked God to show us what he heard and then did our utmost to sonically depict what he showed us and go where he led us. We worshipped and pressed record. 'Awake' is the result. A sound that invites and calls forth; a lyrical journey that declares, exults, exalts and prophesies; a worship experience that invites the worshipper to go deeper, rise higher, love harder and AWAKE to what God (who is not finished) is doing on the earth and to how he is inviting all of us to be a part of it."