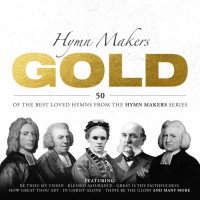 A THREE-CD compilation of tracks from Kingsway Music's popular Hymn Makers series, recorded with several different British choirs and featuring the works of such composers as Charles Wesley, Timothy Dudley Smith, Isaac Watts and Fanny Crosby, will be released on 15th February. 'Hymn Makers Gold' is issued on Integrity Music.