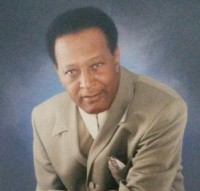 THE R&B and soul singer L C Cooke, brother of Sam Cooke, died in a Chicago hospital on 21st July aged 84. Born in Clarksdale, Mississippi, Cooke and his siblings relocated to Chicago in 1933 where he was part of Rev Charles Cook's The Singing Children. L C and Sam joined The Nobleairs then, in the late '40s, The Highway QCs. Sam went on to sing with the long established Soul Stirrers while LC, like his brother, eventually left gospel music to work in the more lucrative mainstream. In 1956 LC was in the doowop hitmakers The Magnificents ("Up On The Mountain") before signing a solo deal with Chess/Checker Records. In 1960 LC moved to brother Sam's SAR imprint. Later he recorded for Destination Records and Wand Records and toured with Little Richard's band The Upsetters until the late 1960s.