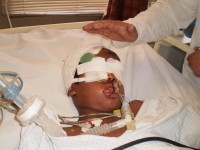 Release International can confirm the death of an 11-year-old boy in the Taliban attack against Christians in Karachi last week. Irfan Masih was shot during an attack by Taliban militia against the minority Christian community in Taiser Town, Karachi. He died later in hospital.

Three nights beforehand Taliban militants chalked threats on the church and Christian homes in the town warning Christian residents to convert to Islam. The population of Taiser Town is overwhelmingly Muslim.

When the Christian residents awoke to see the threats and slogans they organised a procession to call on the authorities to protect their community. But the police refused to send in officers or place a guard on the church.

In nearby Sarjani Town protestors clashed with Pashtun stallholders, leaving three Christians and a Pashtun injured, according to the Daily Times, and forcing the authorities to place Sarjani under virtual curfew.

Two other Christians were injured and are said to be fighting for their lives. The Pakistan Christian Post has named them as Imran Masih and Qadoos Masih. Others were also wounded as the Taliban burnt houses, shops and churches in a bid to drive Christians out of the mainly Muslim area.

Feelings in the community are said to be running high, and according to press reports, the authorities have banned public gatherings and processions.

Karachi is Pakistan's biggest city, its main seaport and the nation's financial capital. It is also the capital of the province of Sindh, making the city a significant target for the Taliban.

'This is another deeply worrying development for Christians in Pakistan', said Release CEO Andy Dipper. 'Strict Islamic law has been introduced in Swat valley to appease the militants and the Taliban have been looking for ways to aggressively expand the rule of Sharia law.

'Today we are witnessing the dire consequence for Christians as the Taliban seek to extend their influence by force - in the biggest city in Pakistan. The government must act now to safeguard the freedom of all its citizens - Christian and Muslim alike - from armed extremists.'