CBN: The Voice Of Christian News

Paul Calvert speaks to CEO Gordon Robertson, about the role of CBN, and his opinions on the Israel-Palestine conflict. 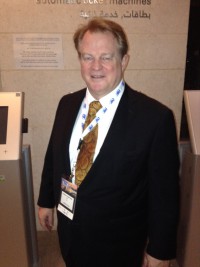 Paul: What is CBN News?

Gordon: CBN is a broadcasting and media production company based out of Virginia Beach. We have offices in Washington DC, New York, and Jerusalem and some bases scattered around the world. The idea is to tell news of interest to Christians.

Paul: When was CBN started, and why?

Gordon: We were started in the late 1970's. It was a dream that my father had, that there needed to be a Christian alternative to the major news organisations, that didn't have the same interests and the same stories. Currently in the US you are not going to find many stories about the christian persecution that is happening in the Middle East and other countries. We wanted to fill that gap, and let Christians know stories of interest to them.

Paul: You also have a heart for Israel as well.

Gordon: Absolutely we have a heart for Israel and again that is a long standing thing. For me personally it goes back to my first trip to Israel in 1969. I saw men dancing with Torah scrolls at the Kotel, the Western Wall, and it was a profound moment for me, it was really hard to describe. I was just 11 years old and it left a lasting impact. I have lost track of how many times I have been to Israel.

Paul: Is there still something to learn even though you come back again and again?

Gordon: I was saying to someone the other day I hadn't been to the Rockefeller Museum in a long time, I think I went back in the 1970's but I don't really recall it. For me every trip to Israel shows a new side and currently just the transformation over the last five years, the amazing technological innovation that is coming out of Israel today is truly astounding.

Paul: Why are you here in Jerusalem?

Gordon: I was invited by the Government to speak at a Christian communicators conference and they wanted me to tell the story of the movie we released called 'In Our Hands, The battle For Jerusalem'. It's the story of the Six-Day War from the point of view of the 55th Paratroopers, the men who actually fought the war and then reunited Jerusalem. So that movie was a tremendous success for us in the United States and we had a premier in Jerusalem too. The paratroopers all attended it and loved it. So they have asked me to talk about how that movie came to be and show some excerpts from it.

Paul: So these were the actual Paratroopers from that time?

Gordon: Oh yes it was done docu-drama style where we had actors portray them from 50 years ago and then we had interviews with them commenting on the scenes that had just been shown in the movie.

Paul: The book of Genesis talks about "I will bless those who bless you and curse those who curse you". There is a lot of hatred coming from the Palestinian Authority, do you feel that the Palestinians are actually cursing themselves when they hate Israel?

Gordon: Well, you look at the plight of the Palestinians and this would go back 70 years. I think they have been intentionally kept in refugee camps, and kept in refugee status. Instead of nation building they have had an ideology of 'let us drive Israel into the sea'. I would submit after 70 years of that, has it really worked for them? And are they better off? At what point in time are they going to realise, perhaps we need to focus in on basic infrastructure and how to create industry, how to create jobs and especially how to live in peace with Israel. If they would do that and stop the glorification of martyrdom, I think the world would be a better place.