China has arrested its highest-ranking church leader since the cultural revolution, according to partners of Release International, which supports persecuted Christians around the world. 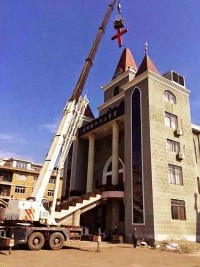 China has arrested the pastor of the country's largest officially recognised church and is holding him in a so-called 'black jail' - an unregistered detention centre at an unknown location.

The arrest comes ten days after the authorities removed influential pastor Gu 'Joseph' Yuese from his position for opposing the cross-removal policy in Zhejiang, a province in Eastern China.

Officials have torn down some 1,500 crosses in the province, which has a large concentration of churches and a highly visible Christian presence. Six were removed last week, according to Release International's partner, China Aid. One justification for cross removals has been given as 'public safety'.

Pastor Gu, of Hangzhou's Chongyi Church, has publicly opposed the cross removal campaign that began in 2014.

Leading Christian human rights lawyer, Zhang Kai, attempted to mount a legal challenge against the cross-removals. He, too, has been taken to a 'black jail'. It is understood that three pastors and the lawyer are now behind bars.

Pastor Gu has been officially placed under 'residential surveillance in a designated location'. Gu's wife, Zhou Lianmei, is also thought to be in detention.

According to Release partner China Aid, Pastor Gu is the highest-ranking national church leader to be arrested since the Cultural Revolution.

Gu currently serves as a member of the standing committee of the nation's China Christian Council (CCC) and chairman of the Zhejiang Provincial CCC. He has served as the senior pastor of Chongyi Church for more than a decade, and has built a reputation as a popular pastor and effective mediator between the church and government.

'China will tolerate the church if it can control it through registration, and providing it doesn't rock the boat. But here we see Christian leaders using the law of the land to stand up against a spurious legal campaign to remove church crosses. And when they do so they are taken out and denied the due processes of the law they are seeking to uphold.

'The Christians Release hears from are not in opposition to their government, despite their persecution - they pray for their leaders and work for the good of their country.

'China is a huge and emerging power. It must become big-hearted enough to tolerate differences of views and values without feeling under threat.

'China needs to celebrate its diversity; to free its Christian leaders and lawyers and allow the church crosses to remain - as a sign of tolerance and stability in the country.'