John Cheek speaks with an actor keen to challenge our pre-conceptions on the nature of God. 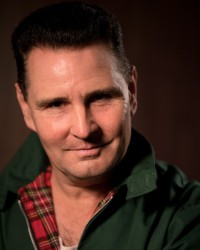 Christopher Power is a performer who has already lived a life worthy of a Hollywood feature-film. A Shakespearean actor with many television credits, including Coronation Street and Hollyoaks, he has recently finished filming his part in a new movie that is scheduled for release in 2019. I spoke with him at his home in the north-west, about the arts, creativity and the nature of God.

"In Genesis, it starts with the words, 'In the beginning, God created...'. He started with an act of creativity. He's a creator God. We have an element of creativity within us all. It's alright for the Christian to be creative, because we were all given an element of that creativity. Throughout the Bible, from Genesis to Revelation, we see glimpses of that creativity: concepts of creativity, such as the Psalms, dancing, singing, music, and language. From the earliest times, mankind was set aside by God, by the Spirit, to be creative. People came together to play musical instruments; people came together to sow. Christ Himself was a skilled carpenter and storyteller. He told parables; He knew the power of words and how to use them, on those around. Look at the parable of the Prodigal Son. When He talked about the pigs, He knew exactly how that word would affect the Jewish audience listening to Him.

"So yes, God is a creator God and we need to understand that, when we look at the arts."

We talked about how mankind in the past, has often abused the arts and these God-given talents. We mentioned how some modern art can be very de-humanising. Christopher doesn't need to be reminded of how certain television dramas and many films portray violence, as entertainment. Do we need to be discerning, or do we need censorship?

"Christians need to engage with society, with culture, using wisdom. Yes, we know that in the past there were certain groups that looked to close down theatres and not engage with any kind of entertainment. But when I read the Bible, the Gospels, I see so much creativity, so much art. Entertainment was still vital to the people then, how they lived their lives. But look at the Gospel of John and how the opening act of God in history was a deliberate act of creativity."

Through Him all things were made; without Him nothing was made that has been made...The Word became flesh and made His dwelling among us.

"The Psalms are full of great imagery. Shakespeare was a 'man of all-ages', they say; a man for all-time. His words are so powerful they can turn day into night. You don't need scenery, the words themselves create that imagery, create the world that the characters live in. That's why, when you go to The Globe (Shakespeare's theatre) you'll find a minimalist set, because language is powerful. Think about that scripture, 'For the word of God is living and active and sharper than any double-edged sword, as it penetrates even to dividing soul and spirit', so words have power.

In His first creative act, God spoke and the word of God has been active from that time on."

Perhaps someone at an office meeting, just doodling or sketching in their notebook, may be expressing their God-given creativity.

"Absolutely, 100%. Talent is talent. We all have gifts, one way or another. Talent isn't just confined to singing or dancing, either. Take the technology and the craftsmanship that allows us to read this. The people who designed and built the PC, laptop or tablet with which we read this article. They've used their God-given talent to bring us to this point."

Listening to Christopher speaking on these things is not only stimulating in itself, it leaves me with a sense of awe and wonder.

Afterwards, I was aware that the neatly-trimmed grass-verges looked the way they did, because someone had used their God-given talent. That the trees on the road weren't there by accident: they go back even further, to when a Creator designed seeds, and then trunks and branches. If we go back to the beginning, in the Garden of Eden there were two trees, in the centre. It's supremely ironic that, when God later redeemed His creation, mankind chose to nail Him to a tree, using the sort of implements He probably had used pretty artistically in His own human creativity, only a few years' before.