Paul Calvert spoke with Chris Mitchell from CBN News about his book 'ISIS, Iran and Israel,' about his experiences as a journalist on the front lines with the Kurdish military, what it was like living in Israel through the Intifada and why he stays living and reporting in the Middle East. 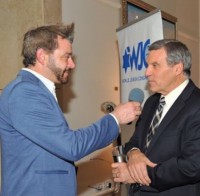 Paul: What is CBN News?

Chris: CBN News is Christian Broadcasting Network. It's based in the United States, but it has a bureau here in Jerusalem and one in Washington DC. The headquarters is in Virginia Beach, Virginia.

Paul: How many years have you been reporting in Israel?

Paul: Wow, right on the Intifada was it?

Chris: It was right on the Intifada. We came 17th August 2000 and the Intifada began September 28th 2000. So my wife and three children were here for just about five weeks before the Intifada began and that was a pretty challenging period of almost four years, with a lot of suicide bombings, terror attacks and shootings.

Paul: Was it a bit of a baptism of fire? And was it scary for you as a family?

Chris: It was definitely a baptism of fire and it was scary as a family. I can remember my youngest daughter at the time, Grace was eight and literally as I was up at her bedside praying with her at night, there were helicopter gunships going outside. She used to ask sometimes, "Daddy when are we going home?" And I had to tell her, "We are home right now." So it was a very challenging time.

There were a lot of suicide attacks and I should say several that were close. My son used to go to the Sbarro Pizza Place, which was bombed. In fact I was there just a few weeks before the bombing with my daughter for lunch, so it was a very challenging time. I like to say that He spared us during that time. It was like Psalm 91, "He that dwells in the secret place of the Most High shall abide in the shadow of the Almighty." He protected us.

Paul: You must have interviewed many interesting people. What has been your most interesting?

Chris: That's a great question. I would say lately, one of the most interesting interviews I have had is with Sister Diana, up in the Northern Iraqi town of Kirkush. That is a Christian village of maybe 60,000 Christians, who were forced to leave because of ISIS in August 2014. We were there a little over two years later in October 2016. We toured the city that had been devastated by ISIS, as well as much of the fighting that went on to recapture the city by the Kurdish military and the Iraqi army, and by the coalition airstrikes.

We wanted to see what had happened to many of the Christians. On the tour I had, Sister Diana explained what they did to many of the churches. One of the most moving times with Sister Diana was in the courtyard of a church called Immaculate Conception, where ISIS had taken out books from the convent and piled them up in the middle of the courtyard and burned them. When we were there, all that was left was a pile of ash. To me that just epitomised the plight of many Christians here in the Middle East that have suffered enormously because of ISIS and other groups like that.

Paul: Being based here in the Middle East you must have a lot of news stories too.

Chris: Yes, there is never a shortage of stories here in the Middle East and here in Israel as well; whether it's archaeology, politics, security, or the Geopolitical system. Someone has said that reporting news from the Middle East is like trying to drink out of a fire hydrant. It never stops and continues, but that's just the way it is here.