Paul Calvert spoke with Chris Mitchell from CBN News about his book 'ISIS, Iran and Israel,' about his experiences as a journalist on the front lines with the Kurdish military, what it was like living in Israel through the Intifada and why he stays living and reporting in the Middle East.

Paul: The media isn't always fair when it comes to Israel. As an organisation are you fair?

Chris: I think we are. That's probably a true statement, that many times the media is not fair to Israel. In fact we just came from an interview with Michael Oren, who is in the Government right now. He is Deputy Minister of Public Diplomacy. We addressed this very issue that many times it seems like Israel takes a disproportionate share of blame for the Israel/Palestinian situation. Yet it's not recognised for many of the things that it does in the world to provide a blessing, whether its technology, medicine, or security. It's a world leader in many of these fields and does provide a lot of good for the world, but doesn't seem to get credit for that. 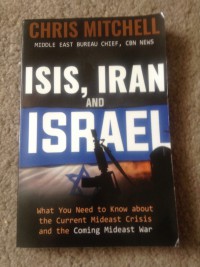 Paul: Why do you think the media misrepresents Israel? Do you think it's a form of anti-Semitism?

Paul: You have written a book called 'ISIS, Iran and Israel,' what is that about?

Chris: It's about the experiences we have had in Northern Iraq and here in Israel as well. It talks about the threat of ISIS.

We have had the opportunity to be on the front lines with the Kurdish military, very close to the front lines of ISIS where we could see an ISIS flag. It talks about what they have done, like I mentioned earlier, to many Christians in the area. We also talk about a report, about the Yazidi ethnic group in Northern Iraq, who have really suffered terribly because of ISIS.

We go into the ideology and what is fuelling their passion. It goes back many times to the Koran and the verses that they take literally about killing infidels. That is exactly what we saw in Qaraqosh. Much of the graffiti was about killing the infidels, beheading them and destroying their crosses.

About Iran we talk about the dangers of the Iranian nuclear system, but we also talk about some of the good news happening in the Middle East, for example, we sat down with some Iranians in Northern Iraq, who had come over for a three day Bible seminar. Many Iranians right now are coming to faith because of a dream, or vision. We sat down with several. We were there with five people and four out of the five had come to faith in Jesus Christ because of a dream. The other person had come because she read a Bible. It's a very common occurrence in Iran right now, where many Iranians are coming to faith through a dream or a vision.

Paul: What inspired you to write this book?

Chris: I felt that it was important for people in the West, to help them understand what is happening here in the Middle East. There is a verse in the Bible that says, 'The sons of Issachar, they understood the times and they knew what Israel should do.' In the position I am in right now, where I have the opportunity to meet people like these Iranians, I have an opportunity to interview or report on different things that are happening throughout the Middle East. I want to be able to help interpret that, to help report that to people in the West so that they can understand some of the dynamics happening in the region.

Paul: We have seen ISIS fire seven rockets into Israel, into Eilat from Egypt, do you think ISIS is a threat to Israel and the Palestinians?

Chris: I do. It seems to be a growing threat to Hamas inside the Gaza Strip and I think they are both a danger to the Palestinians and to Israel. Perhaps not as great a threat as Iran is. I don't see that ISIS would be able to come across the border, but I do feel they would love to infiltrate their ideology to Israelis or Palestinians.

Paul: Why do you do what you do?