Remarkable Guidance for the Fourth Day of Prayer

4. My diary records that the next National Day of Prayer was only six months later. It was called by King and parliament for March 23rd, 1941. The guidance of God must have been evident, for we did not know at the time that this was Hitler's next date for invading Britain.

I have before me Hitler's plan of invasion, which was discovered after the war and published in the national newspapers.

My notes record the following events, which followed the fourth National Day of Prayer:

1. A great earthquake created waves with terrific gales which blew Nazi ships 80 miles off course.
2. That same week, Yugoslavia which had surrendered to Hitler changed its mind and organised resistance.
3. Ethiopia was liberated from Mussolini, Hitler's co-partner.
4. The British Navy fought the Italian fleet in the Mediterranean. Italy lost many cruisers and destroyers and their newest battleship was badly damaged. There was no damage to the British Navy, and no men were lost.
5. The Ethiopian ports were liberated. Haile Selassie, Ethiopia's Christian Emperor, said when no help was coming, 'Then I put my cause into God's hands'.
6. Hitler changed his plans entirely as a result of the submarine earthquake. He gave up invading Britain, and against all the advice of his generals, he turned his attention eastwards to invade Russia.

This was a turning point in the war. We learned later that Hitler had put off the invasion of Britain four times. A full account was given by Mr Attlee in 1946 as reported in the Daily Telegraph:

Figure 7.8. Map of the German invasion plan based on information released in 1946. Source: Daily Telegraph

This Operation Seelowe (sea lion) was based on a landing of two armies with 25 divisions in all between Folkestone and Worthing. Ten divisions were to go ashore on the first four days to form the initial bridgehead. The preparatory phase, an air offensive was to have begun on August 13th, but the Germans decided that the actual invasion could not take place until September 15th. D-Day was eventually put off until September 21st. Altogether, Hitler postponed the plan four times between September 1940 and the Spring of 1942, after which 'it did not seem to be seriously considered again'.

Significant Events after the Fifth National Day of Prayer 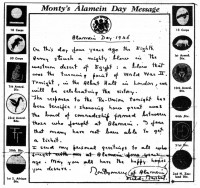 5. The fifth National Day of Prayer was on September 3rd, 1942. It was the third anniversary of the outbreak of war. The very next day at Palermo in the Mediterranean, the whole Italian fleet was sunk. Very significantly, the next month in the North African desert, the Eighth Army under General Montgomery saved Egypt (and therefore Israel) from being invaded by Hitler's powerful tank commander Rommel.

6. The sixth National Day of Prayer was held on September 3rd, 1943. It was a weekday, chosen at the time because it was the fourth anniversary of the outbreak of war. Italy surrendered to the allies that very night, and the dictator Mussolini was murdered.

It was Mussolini who had invaded Abyssinia (Ethiopia). Emperor Haile Selassie's prayer had been answered. The Ethiopians were liberated, and Haile Selassie became a popular speaker saying, 'I glory in the Bible'.

7. In the spring of 1944, the seventh and last Day of Prayer was called by the King.

As 2020 is almost upon us, true Christian believers, need once again to in together in prayer, for we live in dark times, the need is great.
The Lord Jesus, our Almighty, Creator God, is Himself the Way, the Truth and the Light, He says to all
"Look unto me, and be ye saved, all the ends of the earth: for I am God, and there is none else" Isaiah 45:22.
Find spiritual help here...
http://www.holywellevangelicalchurch.org.uk/blog/

There is a call to prayer, setting apart a special time each week during the coming year, check out this website for information. (Copy and paste links)...
https://www.sermonaudio.com/unitedprayer.asp

lord thank you for dr pierce writing to us in his book and for cross rythmn releasing this . father lord we ask that as the intercession won the victory or gb in ww1&ww2 the holy spirit will again release a cry o prayer upon the church and we will see the victory against the spiritual wars we are ightinh.lord father raise up prayer and give us leaders who walk with you for wisdom and deliverance.lord remove our pride and complacency and release a spirit o prayer to grip us to bring our nation back under your governance

And IN this very year, 70 years on. 2 days before the Anniversary of the start of the MIRACLE OF DUNKIRK May 26th - The Ash cloud incident dissipates. A lot of people come home by boat.

For the first time since the 2nd World War we have a Coallition government.

God is reminding this generation I am the God of your Fathers and I am the same yesterday and forever.

Dr Clifford Hill is leading a prayer Spiritual Battle of Britain You can join www.prayerforum.org

WILL IT BE SAID OF THIS GENERATION

I don't think many people, and even many Christians, realise the spiritual implications surrounding the 2ndWW. I read about Churchill's bodygaurd, and though not a Christian himself, noted Churchill's reliance and trust inGodthroughout the entire war, which is rarely, if ever, noted. This country has had 2000 years of spiritual uprising by the spiritual forces described in Ephesians, with, unfotunately great loss of human life,but to litle avail. Let us not take for granted the freedom we have to worship.