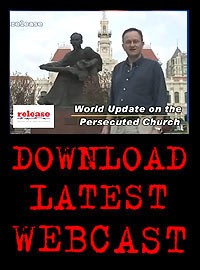 RI's March webcast is a special report from Vietnam, filmed on location. It features interviews with two wives whose husbands have been tortured and jailed for calling for freedom of worship and the return of land seized by the authorities. An ex-prisoner paints a picture of brutality and overcoming faith behind bars.

The next webcast will be available at the beginning of May.