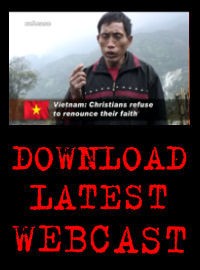 RI's May webcast includes a special report from Vietnam, filmed on location.

Andrew Boyd finds that some of the harshest persecution is reserved for the ethnic Hmong people, who sided with the United States in the Vietnam War. The authorities regard evangelical Christianity as an American import intended to undermine the communist revolution.

China: signs of a crackdown against Christians in the run-up to the Olympic Games

Pakistan: Concerns for Christians deepen, as last year is declared the worst ever for human rights abuses

The next webcast will be available at the beginning of June.