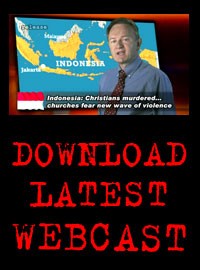 Nepal: Christians are hoping the change from a kingdom to a republic will lead to greater religious freedom.

Indonesia: Churches in Maluku province fear extremists may be reviving a campaign of anti-Christian violence after four believers were murdered in one village.

Eritrea: There are reports that the regime is planning to bring treason charges against several Christian pastors held without charge for the past four years.

The next webcast will be available at the beginning of September.