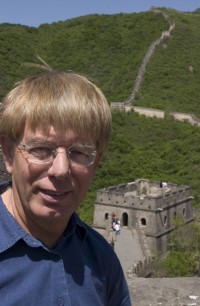 Release International is saddened by the loss of our President, Rev Dr Rob Frost, who went to be with the Lord on Sunday November 11. He passed away peacefully in hospital with his family around him. He was 57.

Rob Frost was diagnosed with skin cancer in June and underwent treatment. In the past few days, he became very tired and was taken into hospital on Wednesday 7th November. He gradually drifted into eternity with liver failure as a result of secondary melanoma.

Rob, a passionate evangelist and preacher, author, broadcaster and Christian leader, was the Founder of Share Jesus International, whose mission is to share Jesus in many different contexts and countries.

As honorary President of RI, Rob has been a tremendous source of inspiration and encouragement, and will be greatly missed.

His last project for Release was to present our video Pray for China, produced for this year's IDOP (International Day of Prayer for the Persecuted Church), held in the UK on November 18 2007.

In 2005 he visited northern Ethiopia to report on the plight of persecuted Christians fleeing from neighbouring Eritrea. Rob also presented Premier Radio's flagship current affairs programme, Frost on Sunday, as well as a weekly TV show on the God Channel, the Frost Debate.

'We will miss his friendship, his humour, and his passion for the Kingdom of God,' says RI's CEO Andy Dipper. 'We mourn his loss, but celebrate his vibrant life and witness for Christ.

'Please pray for his wife Jacqui, two sons Andy and Chris, and his father Ronald at this time.'

Through its international network of missions Release International serves persecuted Christians in 30 countries, supporting pastors and Christian prisoners and their families, supplying Christian literature and Bibles, and working for justice. RI is a member of the UK organisations Global Connections, the Evangelical Alliance and the Micah Network.