El McMeen encourages us to listen for the "still, small voice" 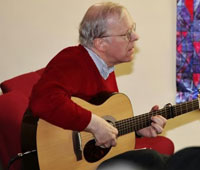 Readers following my columns are probably happy to see a title without "anthills" in it. My last two columns have focused on our little crawly brethren, in an attempt to draw some lessons for us.

So, what's with "skywriting"?

I believe that many seekers of the truth, whether they be denominated "Christians", "agnostics", "seekers" or whatever, would love to have God write something in bold letters in the sky to make things easy for them. Or maybe it would be somebody gazing through a telescope somewhere who sees an alignment of the stars that reads "JESUS SAVES." The newspapers would then have copy for at least a couple of days, before getting back to coverage of the latest celebrity breakup.

But...here's the thing. Jesus rose from the dead, and the Gospels are chock full of miracles, signs, and amazing events. Jesus died and was resurrected once-that's it. He's not going to do it again and again, for our convenience, and to make our faith easier.

The Gospels also document something else: the tendency of us human beings to become distracted in our everyday lives and forget God's fulfillment of our desires, or even miraculous things.

Consider the disciples. They were exposed to the miraculous, it was explained to them, and yet it took the Resurrection to make the disciples (other than Judas) into the titans for the faith that they would become.

We, too, forget to listen for the "still, small voice" of God. (heard by the Prophet Elijah, as recorded in I Kings 19:12). Or, if we hear it, we forget to record it, or we pass it off as an anomaly or as a coincidence.

Yes, that really happens. People encounter miraculous things, put them out of their minds, and then they are lost.

Aware of this human tendency, I want to share with readers four examples from 2006 in my own life of what might be called signs or the miraculous. The "still, small voice" spoke to me in the visual realm. I have had four visual manifestations of Jesus. I will discuss two in this article, and two in the next article.

Before describing the circumstances, I must say that I'm not special-just another person trying to find out about and walk in the Way. The manifestations were not meant for anyone but me, in the contexts in which they arose. Sometimes we read in the newspapers about people witnessing an image of Mary or Jesus, and then they rush to bring others in for some validation. That is unfortunate, and can turn a private blessing into a three-ring circus.

The first situation for me occurred in a hotel room early in the morning before I was to go into a recording studio for three solid days in February 2006. I was preparing to produce tracks for four guitarists. I had not met two of the players, and was apprehensive about whether or how the session would work out.

I prayed for strength and wisdom, and during the prayer, I got a glimpse of a man in a cloak sitting on a stool next to the drum set in the studio! It was quick, and the figure was barely illuminated, but I knew who He was.

As I tried to get my mind around this, what should happen but that the alarm clock in the room began to buzz! I had set it for 6 AM, but had gotten up earlier and forgot to turn it off. I took that as confirmation of what I saw with my mind's eye!

As things turned out, the recording sessions were more productive than anybody involved predicted. The players recorded and we mastered 20 tracks in as many hours.