Thou Shalt Not Kill?

John Cheek is challenged to consider pacifism as a life-style choice. 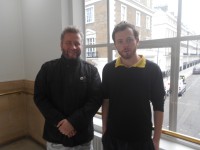 Becoming more 'Christ-like' has been a fashionable aspiration among Christians for years. But what would it actually look like? Jesus walked this earth and caused controversy, angered the rich and powerful and was such a threat to the authorities, that they crucified him. If we want to be 'Christ-like', shouldn't we behave in a like-way?

Meeting with Sam Walton in London, I encountered someone who could not only teach me a thing or two on that score - he also inspired me to revise my thoughts and theology on pacifism, the arms-trade and the value of human life.

Of course, no-one knows the true extent of our involvement - but it's commonly believed that Britain is the third-largest arms manufacturer in the world; that Saudi Arabia is the biggest customer of British companies dealing in arms; that the Saudi military are involved in an illegal conflict in the country of Yemen; that innocent civilians are being killed there, by British-made bombs and fighter-jets. In their hundreds, if not thousands.

"I would call on Christians to take their morality from Jesus Christ, not from those around them," asserts Sam Walton, a leading Quaker activist who, along with Rev Dan Woodhouse, broke into the BAE Warton base in Lancashire, in January 2017.

Stationed there, were British-made fighter-jets with Saudi markings, bound for imminent shipment to Saudi. The two Christians intended to disarm each plane, reasoning that any delay in their export would equate to innocent lives saved, in Yemen - perhaps 10 lives, for every week of delay? The Christians willingly offered themselves up for arrest, when security interrupted them and were held and charged at a police station in Blackpool.

"I've been doing stuff about the arms' trade for a while," explains Walton, "when I was 15, I went on my first march against the trade with my little brother. I've written to my MP, met with MPs, signed petitions, attended and protested at a BAE Systems AGM, and we weren't getting anywhere. There's a severe democratic deficit here, so we needed to do more. So I looked for people who would join me, in non-violent direct action, a bit like a certain carpenter from Nazareth."

He met Dan Woodhouse, a Methodist minister, at a wedding. But what caused these contemporary prophets to attempt some modern 'swords into ploughshares' actions?

Walton refers to seeing an image of part of a shell left over after the bombing of innocent civilians. Visible was a serial number, which could be traced back to a factory in Glenrothes in Fife, indicating it was sold to Saudi after March 2015, in the full knowledge that it would be used in the indiscriminate bombing of men, women and children as well as civilian infrastructure.

"I was shaken. I took a bit of time off work, to think about what God's calling was for me; how I can best serve God in this situation. We all serve God in different ways. It felt like it was what-I-was-put-here-to-do. This is the reason I have been put on this planet. I have a duty to be effective in serving God."

As well as serving others. The Jesus whom Sam describes as his Saviour, appeared to practice what we now regard as pacifism, a life of non-violence, all through the gospels. From his forgiveness extended from the cross to those who tried and crucified him, to such teachings as 'love your enemies' and 'all who live by the sword will die by the sword'. I increasingly suspect that to be 'Christ-like' is to embody a lifestyle that has no truck with revenge, but instead embraces non-violence, even under duress.

"I believe that Jesus doesn't call anyone to war," explains Walton, "so respect the laws of your state, but let your first loyalty be to God's purposes."

At their own trial, at Burnley Magistrates' Court in October 2017, Sam Walton and Dan Woodhouse were found not guilty. District Judge James Clarke ruled that they had taken action for the greater good, "to prevent greater crimes from taking place."

If we aspire to be 'Christ-like', we now have an example of following the Prince of Peace by embodying non-violence and causing holy controversies. I'm challenged by Jesus' words to "go and do likewise."