Erica Mason: The acclaimed rapper/poet describes her battle with depression

Tony Cummings reports on the latest single from the Florida-based communicator, ERICA MASON 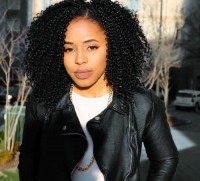 As many emo bands have demonstrated, writing songs about depression makes for depressing music. However, rapper/oblique poet Erica Mason has risen to the challenge and, with her latest single "Outside My Mind (ftg Giant Killa)", she has created something which is both insightful and, in its own way, uplifting.

The Florida-based rapper spoke on her YouTube channel about her new track. "'Outside My Mind' was something that was super unintentional, but just to dive deeper into why I chose to do it was because I used it to vent. I used it as a form of escape. I wanted to just have the freedom to express things I felt inside my heart but I couldn't necessarily communicate with my words. One thing that I truly struggled with was anxiety. A lot of my anxiety just came from being way too busy. If there's one thing I have learnt in this moment of my life is just because you are busy, does not necessarily mean that you are successful. And when you get too busy, it stifles your creativity and it also causes you to be anxious for absolutely no reason."

Erica continued, "You are feeling anxious when you're overwhelmed by life, that's when, for me, it led to feelings of depression, having thoughts of suicide, and ultimately not feeling like I was worthy. And I really struggled with it for a while, I didn't necessarily feel like I could vocalise it, because I believe that sometimes it's hard to say exactly what you feel, especially when you feel like people might not understand those feelings. So I used 'Outside My Mind' as a way to just express how I was feeling with no limits, no boundaries, just to be open and vulnerable and transparent. And being able to share that journey with other people who connect with my music meant the world to me. I didn't want to just choose some random person, but at the same time I didn't want to necessarily work with the top people in our industry. I wanted to choose somebody who really connected with the song."

The release of "Outside My Mind" has brought her a positive response from Erica's fanbase. The big question is whether the cathartic nature of writing such a song has helped Erica in her journey. Her YouTube confessional continued, "Do I still have days where I feel anxious? Yeah. Are the days a lot better? Absolutely. Do the days of anxiety come a lot less and the days of suicide and depression? Absolutely, they come a lot less! But to sit here and say that I never feel that anymore, no it's not true, but I think that knowing that I'm not alone, knowing that I don't have to succumb to my own thoughts of anxiety, thoughts of depression, and I know that's because of God on the inside of me. That's who God is in my life, that I can trust him with those feelings of anxiety, I can trust him with my doubts and fears, that is what continues to allow me to have better days ahead.

"So if there's one tip that I can give someone who might be out there who's like me, I would just tell you, 'Hey, take it one day at a time. Sometimes you've just gotta slow down, make sure that you look at things in your life with the glass half full and not half empty. And slow down. Slow down'. I think sometimes we get so caught up, a lot of our frustration and our stress comes because we are moving, we are constantly going, we take less time to reflect, and we take less time to connect. So I always say connect with God. Not just on some old 'oh, I'm just trying to save some religious term here', seriously take a moment when you feel stressed, when you feel no one understands, and pray."