Erica Mason: A rapper determined to be Pretty N Radical

The hip-hop artist from Gainesville, Florida, Erica Mason is up and running as far as Cross Rhythms is concerned with her single "Talks With Loneliness" but since she emerged onto the US scene in 2013 the rapper and motivational speaker has packed a lot in.

She said, "I often describe myself in two words: pretty n radical. It simply means to love yourself. This movement has opened the door for me to connect with other musical influencers as I opened for international recording artists Tink, Andy Mineo and Dee-1, while working with Grammy Award winning producers Spec, JR, and Khao. My passion is to empower young women and men to find who they are and help them reach their fullest potential. As a young woman who grew up in Gainesville, Florida, I understand all too well how to overcome life's adversity while refusing to allow my circumstances to dictate who I am. I come from a family with a history of drug abuse and addictions. I have had to overcome the hurdles of being taken advantage of sexually, while fighting depression and suicide. If it weren't for the mentors, teachers and adviser's in my life, I would not be the woman I am today."

She continued, "Despite the adversity, I was able to graduate as the first black valedictorian of my high school in which I received a full ride scholarship to the University of Florida. Throughout my college career, I decided to follow my dreams with full force, and I pursued a career in music and motivational speaking. Four years later, I am now an international recording artist who charted Top 30 on iTunes and I travel the world speaking at national youth and women's conferences and empowering other young women to embrace who they are and to love themselves. My heart is to inspire other young girls like myself to push pass the odds and strive to achieve the greatness locked inside of them!"

Erica spoke to trackstarz website about her early days. "I used to rap at the lunch room tables and on the school buses with friends just for fun. But when I heard my first hip-hop song rapped by a Christian, he inspired me to write about the struggles that I was going through. Later, I performed a song I wrote for my church on youth Sunday and EVERYONE in the church was crying as they were so empowered by my words. In that moment, I knew that my talent was more than just music." 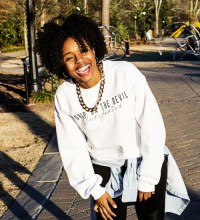 Pivotal in Erica's rise in popularity and influence is her manager, Will Thomas. She recalled, "Will Thomas shot my first music video, 'Closer To You'. I remember I had to cancel on him twice because of an allergic reaction that broke out on my face. Once we finally shot the video, Will and I had a good connection, but were never had intentions on being friends or him managing me. About six months later he randomly texted me asking for prayer. So I prayed for him and stood with him in a very tough season. We became good friends. About two years later we both prayed about it and he made the decision to manage me. Having Will Thomas as my manager is definitely a game changer. He shares my same heart and passion for the industry and ministry and it has helped me grow tremendously."