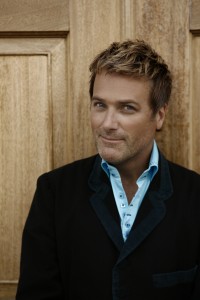 I'd arranged to meet up with Michael W Smith before the premiere of his new DVD 'A New Hallelujah' at London's famed All Souls Church. I was a little bemused as to what precisely would happen at a premiere of a worship music DVD. Would there be a speech from the film director? Would the audience be dressed in dinner suits? As it turned out, Michael did a short set at the piano before the DVD was shown on a giant screen, and very impressive both were too, with most encouraging of all many of the packed throng clearly entering into worship during the sights and sounds of the evening.

In a small side room prior to the DVD launch I chatted briefly to the CCM star as I assembled my hard disc recorder. I reminded Michael that we'd met once before yet though I'd held hands with him I'd never previously spoken a word to him. Intrigued, he asked how this unlikely event had occurred and I explained how in 1988, after an interview at Greenbelt festival with Amy Grant, the singing star had asked me to go back stage to pray with her before her performance. Things got delayed and the prayer took place when this nervous journalist walked on mainstage with Amy, Michael W Smith and a host of band members to begin their performance. We stood in a circle to pray. And that's how I got to hold Michael's hand. Michael chuckled and then I began our interview with a question which seemed appropriate, considering my struggles to get the recorder to work.

Tony: Are you a bit of a techy yourself, Michael?

Michael: I'm a techy to a certain degree but not like my kids. You know, this next generation - if I don't have a clue then I talk to one of them and they help me get it figured out.

Tony: Have you got a home studio or anything like that?

Michael: I do have a little studio in my house but I have a recording studio in another building, which is in Franklin, Tennessee, just south of Nashville.

Tony: That's not called Rocketown, is it?

Michael: There used to be Rocketown Records there a long time ago. They didn't have anywhere to put the staff so they all came to my studio and we all sort of started stepping on each other until we had to kind of separate. It's a good spot for me 'cos sometimes it's fun to write at home but sometimes you need to get away from home to write.

Tony: Is it difficult then, simply because of the kids and the distractions, to get into some serious writing?

Michael: Well, in the past it was that way because my kids were young, they were running around. When your kids are from two to 12 years old there is definitely a lot of drama and activity. But now they're older and they're all writing songs and they're filmmakers so there's quite a bit of inspiration in the Smith house. It's not just Dad playing anymore, they're all playing.

Tony: Is this something that's in the genes? You know, some families seem to have more creativity than others. Do you think there's something in that?

Michael: I definitely think there's something to it. Can I explain it? No. I have a houseful of actors, filmmakers and musicians.

Michael: (laughs) We still like The Sound Of Music.