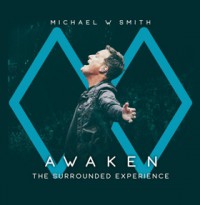 A LIVE worship project, 'Awaken: The Surrounded Experience' by Michael W Smith, will be released on 22nd February through Rocketown Records/The Fuel Music. Recorded at Bridgestone Arena in Nashville with special guest CeCe Winans "and the voices of 14,000 that attended the evening," it features songs from 'Surrounded', for which the singer recently received his 11th Grammy nomination. Said Michael, "The night was beautiful. I remember thinking, 'This is what Heaven will look like.' A picture of unity, with all colours, ethnicities, denominations and ages joined together in worship. I'm still hearing reports of lives changed, commitments deepened and people empowered in a new way. We may each have different stories, skin and songs, but we all share his same Spirit."