Tony Cummings reports on a CCM bestseller who is also something of a evengelical sex symbol. 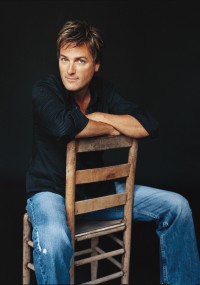 It was on a cold February evening in Nashville, Tennessee that the phenomenon that is Michael W. Smith finally came into focus for me. It was row upon row of squealing girls that did it. Somehow the penny hadn't dropped until then. I'd seen the album sleeves of course. The flashing good looks and the designer stubble. But somehow I didn't have Michael W. Smith pegged as a less-sleazy-than-George-Michael target of nice Christian girls pubescent fantasies. But here was a theatre full of giggling and squealing fantasisers. It was kind of disappointing. It didn't say much for the maturity of America's pop gospel scene. And up until then I naively thought Michael had become America's top selling male artist (a gob-smacking four different albums now having gone platinum) purely on his musical ability, which is far from inconsiderable. After all it takes real talent to play such inventive keyboards and write some of those gloriously catchy pop-gospel tunes and though his voice isn't the stuff of soul music legends he uses his white-boy wheeze within its limitations to often compelling effect. 'Michael W. Smith 2', I 2(Eye)' and now 'Go West Young Man' (with a major promotional push from secular giant Geffen) are finely crafted pop albums which show their sparkle despite the misguided behaviour of Bible Belt American misses turning music into idolatry. The more I thought about it the more it became obvious that Michael wasn't happy to be some kind of evangelical sex symbol. He had gone out of his way to be photographed with wife and four (yes four) children in recent years and in several interviews has displayed both a seriousness about his musical craft and a very real desire to communicate spiritual truth through the difficult vehicle of the pop album and video. Whether Geffen will be able to turn this giant of subcultural popularity into a mainstream pop megastar remains to be seen (it should be remembered that a previous attempt with The Big Picture' album never even began to get off the ground). What is certain however is that as long as there is a public for songs that speak of battles against temptation, and victories through a heart filled with Christ's Spirit set to catchy dance-pop rhythms, Michael W. Smith will provide them whether or not the squealing girls continue.

While a number of the top CCM artists were rock artists prior to conversion it was the other way around for Michael. He grew up hearing the wind in the West Virginia trees, the great hymns at church, his grandmother's Chopin lessons, choral works at school, the inimitable pop stylists, a little calypso along the way - all in addition to the Beatles and rock 'n' roll.

Michael's memories of the early days are not all that soaring. "I became a Christian at the age of ten. In the eighth grade I walked down the aisle to dedicate my life to some form of fulltime service," he recalls. "But after I graduated from high school, I went wild.

"At the time I thought I was mad at God, I was bummed out. I obviously had all this talent, but nothing was happening. Now I think I was mad at myself, because I hadn't prepared myself as fully as I needed to. You can't do it on talent alone. I try to encourage people today to do your homework! Everybody wants it - no matter what 'it' is - all too easy. And I was one of them!

"From time to time I'd realise I needed to work harder. For four or five months one time I took piano lessons off Mary Shipp Mann. She's a concert pianist and was Shane Keister's teacher. She told me that if I wasn't going to practise, don't come back. I didn't go back. I was still partying when I moved to Nashville in '78. I knew I wasn't doing what God wanted me to do. I tried running away - drugs and the whole thing. Finally I realised my anger was at myself. And then I began praying, 'Lord, I'll press on, till I'm more like you.'"

By 1979, based in Nashville, Michael W. Smith was beginning to make headway as a gospel music songwriter and session player. He also began to engage in occasional gospel tours first with group Higher Ground then in the early 80's gospel's emergent first lady, Amy Grant. It was the huge popularity of a Smith song on Amy's classic 'Age To Age', "How Majestic Is Your Name" which soon led to Smith recording his first album in 1983 'The Michael W. Smith Project'. The launch as a solo-artist career for the behind-the-scenes stalwart was something of a surprise for Michael.

"I wanted to do a pop album in L.A. with Randy Cox at Tree," remembers Michael. "That's what I honestly thought God wanted me to do at that point. I had some things I needed to say to that audience, and I felt that was the way to do it. Then, through a whole bunch of situations that aren't easy to list in order, we got to talking to (managers) Mike Blanton and Dan Harrell."

Michael's grin fills a pause as he makes an effort to list some of the "situations."

"Well, first one thing and then another, you know. They'd say, 'How d'you feel about this or that?' And I'd say, 'That sounds good.' And next thing you know we were working on the first album. Expecting that it might sell 30,000 copies, it sold 200,000. That was a surprise!"

The unexpected success of 'The Michael W. Smith' Project was due in part to his high profile appearances as accompanist to Amy Grant. He quickly learnt how to work a large audience. "When you get out there in front of as many people as Amy draws you learn to relate to the crowd in a hurry", Michael laughs.

'Michael W. Smith Project' was a decidedly flawed small-budget album with all the songs written with his wife Debbie. It did however contain two classics - the worshipful "Great Is The Lord" and the haunting ballad tribute to friendship "Friends" (knocked out one afternoon as a tribute to a Bible-study friend called Bill Jackson). For the follow up Michael brought in some more collaborators including Gary Chapman and Amy Grant. 'Michael W. Smith 2' was a near perfect selection of synth-pop bubblers with one or two anthemic choruses. It zoomed to the top of America's Christian music charts, won a Grammy Award and by the time Michael set out on his first headlining tour - a 52 city skate across the States and Canada in 1986 with support act Kathy Troccoli - he was already a CCM star. Michael is very aware of the spiritual dangers of his huge success within evangelicalism.

"Anyone in leadership is more accountable. I seriously believe that because of the success I'm having, I walk a fine line. It's not easy, but I accept that as part of doing what God wants me to do. I realise that the Enemy - and I mean Satan - won't miss a chance to distract me from what I'm doing. I have to be on guard every minute.

"I understand the power of music - all that excitement on stage, all that energy. I could tell 'em to do most anything, and half of 'em would do it. That's a heavy responsibility. Yet, I don't get paranoid about it. I don't spend hours before a concert worrying about whether I'm gonna do or say the wrong thing. I just get out there and enjoy it. I fully and completely believe I'm doing what God wants me to do, and that He'll provide me with the strength I need."

Michael needed all the Lord's strength to deal with the controversy that broke out with the release of his next album 'The Big Picture' in 1986. Denounced on national television by TV evangelist Jimmy Swaggart, even Christians of a less rock-hating fundamentalist breed found The Big Picture' a lyrical compromise. With the strongly overt message of its predecessors abandoned in favour of obtuse semi-mystical imagery and rather heavy handed social comment it was seen by his critics as a crass 'dump the Jesus references' quest for a Top 40 hit.

This is quite an indepth look at top CCM artist Michael W. Smith from a stout believer's point of view. I thought that CCM artists one main goal was to bring CHRIST to the world through their music. Instead, they are selling a sexy image with top name brand wear. I agree with the above writer "IT IS VERY
DISPPOINTING!". I fear that, the singer is being worshipped more than what the song is saying; and it
is so sad, as these CCM singers have great songs!
Are CCM singers separate from the world? they offer, posters to hang up, buttons to wear, t-shirts for fans of their idolized singer etc.: have CCM artists gone off track? We are commanded to flee idolatry! If Michael W. Smith is somewhat of an evangelical sex symbol,
SOMETHING IS WRONG WITH THE BIG PICTURE!
May GOD continue His work in all!