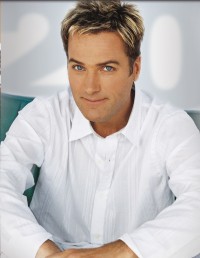 It was on April 20th 1999 that 18-year-old I Eric Harris and 17-year-old Dylan Kelbold disturbed the peace of a typical school day at Columbine High School in Colorado. The sound of their shooting echoed down the school corridors as students cowered, hidden, fearful. The two students were well known in the school for their virulent hatred of Christianity and Christians. Soon the rest of the world would know it too.

They entered the school library and walked up to 17-year-old Cassie Bernall who was well known as a Christian. One pointed a rifle to her head and asked, "Do you believe in God?" Cassie had given her life to Christ and it was God's spirit living within her which inspired her response. "Yes," she answered. A split second later she was dead at the gunman's feet.

Hundreds of miles away, Michael W Smith heard the news. "I was actually in my studio working on my record. I think I got a call from somebody saying, 'You need to turn on the TV.' I did and started finding out what was going on. It was very disturbing. There's so much tragedy but I seem to really wake up and pay attention when it comes to kids because I love kids. So! Little did I know that three days later I'd get a call from the Governor of Colorado and be asked if I would come and participate in a memorial service."

It was at the memorial service that the world began to grasp hold of the truth about the unlikely martyrdom of Cassie Bernall. Billy Graham's son Franklin spoke of hope and preached a powerful Gospel message drawing inspiration from the testimony of Cassie's radical conversion and her sad death. Smith remembers, "I went and did the memorial. I sang a song called 'Friends'. It was telecast all over the world; it was a very heavy thing. That's when I met Cassie's mom and dad and have become good friends with them. In the meantime when I got home I couldn't get Cassie off my mind."

The song he wrote is the title cut of Smith's new recording 'This Is Your Time' and one of the most powerful songs of Michael's long career. Yet he struggled to finish it. He remembers, "It was pretty wild. I woke up at three in the morning and I wasn't really happy with the way that 'This Is Your Time' ended. I was happy with the song in itself, I think it's an incredible lyric, but musically I thought it needed to end differently and so I woke up and heard bagpipes one night. I began to write this thing in my head as I lay in my bed. I got up the next morning and went into the studio, threw the parts down on my computer and two weeks later we had a bagpipe troupe here in Nashville come in and do bagpipes. It was like wow! It just totally changed the song."

However, the decision to add bagpipes to the track was more significant than Smith realised as he worked on the recording. It was a God inspired decision. He recalls, "I called Cassie's mom because we stay in touch and she wanted to know how the song was going. I told her I'd just changed it musically and put bagpipes on it. She had a copy of the original song without bagpipes. I told her she was gonna love it when she heard it. She got quiet on the other end of the phone and she said I wasn't going to believe what she was going to tell me! I said, 'What?' And she said, 'Cassie loved bagpipes. She talked about bagpipes all the time, it was her favourite instrument.' I got the chills, my knees buckled. I just don't think that's a coincidence. I think that's very much a God thing. I think he woke me up one night and played the bagpipes for me. It was all I could figure out. A pretty amazing story!"

But then 'This Is Your Time' is an amazing album from a man who has made a career out of recording amazing albums. From his 'Michael W Smith Project' debut to the present release, he's seen many changes in the processes involved in recording albums but still says he gets a buzz about recording. "I think I still get excited." He laughs, "I guess the biggest change is technology and all the great things you can do these days, recording on hard-drive and all that sort of thing. I think I got more excited about making this record probably than any record that I've done, and this is record number 13 if I'm not mistaken!"

Smith elaborates, "From a musical stand point I think I'm just trying to make great records. I'm trying to grow, and hopefully, this record is a sign of growth. That I'm getting better at what I do. I still think I'm a pop guy. I mean I make pop music and obviously I want to say something with the songs I'm singing. I want them to be life changing for somebody. I want to challenge somebody, so the last thing I want to do is write fluff. I want it to mean something. I'm not trying to say anything that's too profound but I do want to make a great record, and that's what I set out to do every time."

Michael continues, "I'm excited about 'I Will Carry You' too." The song features an awesome choir comprising some of the top singers in Nashville's CCM scene but that alone is not the reason for Michael's enthusiasm. He says, "Sometimes you don't totally understand why but certain things just push your button. Even today, I don't sit around and listen to my records all the time, but I always find myself humming part of 'I Will Carry You', and so sometimes that can be a good sign that this thing might live a little longer than you thought it would."

"This Is Your Time" is Michael W Smith's thirteenth album in a career that has seen him progress from his humble beginnings as the shy keyboard man in Amy Grant's backing band and writer of the perennial favourite "Friends". He saw pop chart successes in the early '90s with the crossover hit "Place In This World", and the raised profile even reached People Magazine who described him as one of the most gorgeous people on the planet. These days he's one of CCM's biggest stars, a family man and record company mogul. Basically it's been quite a trip!

And it still is. Michael is on his cell phone, making space to talk to me - the only UK media interview he is giving. He's busy, and he's trying to give me his full attention, but he also promised to see his kids after school before he is away from home for a few days. So in the middle of our conversation, there's a hiatus while he takes time out to do that! Then we restart. Phew, I feel tired just talking to him! But looking at the length of his career and the things that God has led him into, it's possible to think that Michael W Smith has it all! He's happily married, enjoys his kids, lives in a large house, and his career is going well. I wondered if he thinks that people think that the grass is definitely greener on the Smith side of the fence?

He reflects, "I would think that they would think that but little do they know all the pressures. They all think it's a bed of roses and sometimes it can actually be the opposite. There's tremendous responsibility and you get tired and the list goes on. I'm not at all complaining but there's a lot more that goes into it than what people think."

So is there a difference between Michael's image that he has to portray as part of what he does for a living and the reality of what he actually lives? "Well, I think there is a reality gap" he admits. "I think the older I get though I couldn't really care less about the image. I think it's the battle with record companies and PR folks that want to put your picture on everything. I'm saying to them, 'Take my picture off, I don't want my picture on there.' Then I think, as you get older you just go, 'Hey man! This is just me.' I love to talk about my kids. I love to talk about my relationship with my wife. If you really had a chance to spend any time with me and just hang with me for a day you'd probably say, 'Hey! He's just a normal guy.' So I'm not up for playing the whole game of being Mr Celebrity. That's not my thing."

What about when he made the People Magazine list for being one of the most beautiful people on the planet? Was it a bit weird? "Yeah! I would absolutely totally disagree. It was very strange. I guess I thought it was great for my mom and dad! They thought, 'My son's in People Magazine.' It was the 50 most beautiful people, which is really kinda stupid if you really think about it, just the thing to sell magazines. It was flattering I guess but very strange."

you are a source of inspiration to me since your songs have been touching me. May the Almighty Father shower you with his eternal blessings to continue to preach the good gospel through your music