Soul Survivor: The phenomenon that makes a difference

Three sizzling hot days in July was the time assigned to journo Tony Cummings and photographer Liz Whitehouse to go and report on the Christian youth phenomenon of the '90s, SOUL SURVIVOR. This is what they brought back.

Mike Pilavachi is either off his head or truly inspired. He is breaking every trusted convention of big Christian events, preaching a message about taking new found fire and passion for Christ out of the meeting hall and into the world not at the end of a festival or Bible week but at the very first meeting. You can hear a pin drop in the packed Showering Pavilion at the Bath And West Showground, Shepton Mallet as the 5,000 plus crowd (seemingly 95 per cent teenage) listen intently to the "big fat Greek" (his own startling description). Memorable one-liners cascade from a message aimed at dispelling inertia as we wait for revival. "I get quite upset when we hear more about revival than we do about Jesus." "Revival will not come when we go across the ocean but when we go across the street." "Let us seek less to receive yet another blessing, and more to be a blessing."

This is a message of almost brutal directness, one which should be printed (it has, in issue 13 of Soul Survivor magazine) and posted to every sneering critic who rubbishes the charismatic movement for being (a) revival-obsessed and (b) so enamoured with the supernatural dimension of the Kingdom that they're unwilling to get their hands dirty.

There's a lot of talk about getting hands dirty at Soul Survivor. This event, which has grown startlingly in its five years from a young-peoples' offshoot of the Spring Harvest-style New Wine event for members from John Wimber-influenced churches, to become the fastest growing movement among young Christians in Britain, is a million miles from the happy clappy insularity of popular stereotype. Soul Survivor have joined forces with the World Wide Message Tribe and have announced a scheme where in the year 2000, both ministries will take possibly thousands of young poeple into Britain's inner cities to live lives overflowing with Christ. This is indeed daring to make a difference.

Pilavachi finishes his message. There's no hype, no whipping up of evangelical guilt or charismatic excitement. Just a dignified request for those who specifically felt God speaking to them in the message to come forward for prayer. The response is breathtaking. Tens, then hundreds, then seemingly two thirds of the hall surge forward for ministry. Sitting as I am at the edge of an aisle I am jostled by teenagers literally running forward for prayer. 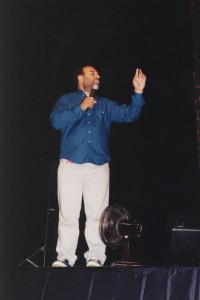 Matt Redman and his band start up again as the ministry team begin the impossible task of praying for the throng by now clogging every inch of floor space. Immediately behind me a young girl in loud, racking sobs repents of the coldness of her heart towards the unsaved. To my left, a young lad with hair shaved in spectacular tufts lies completely prostrate. Over the incessant murmur of a thousand prayers the music surges. "We're knocking knocking on the door of Heaven/We're crying, crying for this generation/We're praying for your name to be known/In all of the earth/We're watching, watching on the walls to see you/We're looking, looking for a time of breakthrough/We're praying for your word to bear fruit/In all of the earth, in all of the earth."

t's Sunday afternoon and I'm in the Dregs Cafe - a g tent with a PA and sound stage - enjoying its laid back vibe, a lemonade and Supervision playing a stripped-down (quite literally, it's hot and getting hotter by the hour) acoustic set. The band, from Liverpool, exude laid back bonhomie and even helpfully engage in cheesy posing for photographer Liz.

In the resource area known as the 'Warehouse, which betrays its farming folk origins with a distinct cattle smell, business is brisk. Books and Bibles are being bought, CDs are slipping into plastic bags, and a wide sweep of ministries are explaining their work to people dropping by their stands. The most crowded stand seems to be that manned by some intrepid Furious? Records workers who despite Delirious? not being at week B (or indeed week A, the band had to pull out due to Martin Smith's sore throat) have sold completely out of large size Delirious? T-shirts.

A teenage couple, clearly in love, engage in a Bible study, perched on a low wall half way between the main hall and the line of fast food vans. The bespectacled young man smiles as I walk past.

The phenomenon that is Matt Redman defies mere musical analysis. His songs are captivating, sinuously melodic, rhythmically solid and with words that both speak faith without cliche and have a prophetic resonance that perfectly captures the heart of this event. As he leads his band, Matt and back-up singers strung unprepossessingly across the stage, I stop taking musical notes - the dreadlocked drummer is rock solid; Matt's covers of Martin Smith and Kevin Prosch are exemplary - and begin 'instead to worship.

Worship, true worship, changes us and I feel layers of my pride and self deception fall away as we sing the transparent words of a young man determined to rise above the banal temptations that would elevate a worship leader to a 'star'. "I'll bring you more than a song/For a song in itself is not what you have required/You search much deeper within/Through the way things appear/You're looking into my heart/I'm coming back to a heart of worship/And it's all about you...all about you, Jesus/I'm sorry now for the thing I made it/When it's all about you...all about you, Jesus."

I stand outside the hall in the clammy evening air, pointing my tape recorder at a group of extraordinary praise and worship composers, extraordinary for their youth as much as their talent. They have composed the songs on the new Survivor Records CD 'Soul Survivor: The People's Album' which features their songs performed by such well known worshippers as Martin Smith. Matt Redman, Paul Oakley and Brian Doerksen. Two of this impressively focussed bunch of young men and women particularly impact me. 16 year old David Gate from Harrow exudes a freshness and determination to go where the Spirit blows him while, in response to my question about his song "I've Fallen In Love", Pete Kent says, with luminous transparency, "Jesus is a very special friend to me."

MIC from South Africa are going down a storm. Their pop dance set pounded out with theatrical aplomb in the Pulse. Swathes of gyrating teenagers dance with abandon, cheering every frequent reference to the Lord.

It's past 1.00am, the burgers and roast beef stalls are still doing a roaring trade and seemingly, two thousand young people have no tents to go to. Animated laughing, jostling gaggles stand on the still warm tarmac. There is no swearing, no snogging and definitely no drugs (save for a tiny handful of rather embarrassed cigarette smokers). Two skateboarders weave in and out of the throng.

The World Wide Message Tribe have got a big crowd to their morning seminar. With plenty of amusing anecdotes and a passionate exhortation to get involved in mission, rapper and evangelist Andy Hawthorne talks with no-holds-barred directness to the crowd.