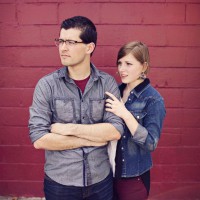 A SINGLE "High Enough" by Chicago-based husband and wife duo The Gray Havens features Humble Beast rapper Propaganda. Said The Gray Havens' David Radford, "I have admired Propaganda's lyrics and artistry for a while now. He's incredibly talented and I was absolutely thrilled when he agreed to the feature but I would be lying if I said I wasn't a tad nervous about how everything would turn out. I remember when we got the recording back from Prop, though, jumping out of my chair, asking (forcing producer Ben Shive) to listen before me through headphones while proceeding to pace nervously around the studio shooting over-anxious glances every 10 seconds so to gauge his reaction. First and enthusiastic nod. Then a thumbs up. Good signs both. Then my turn to listen. . . It was perfect!"