The CD/DVD of 'Legacy' by Planetshakers out now 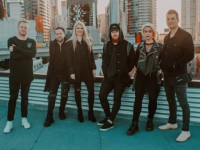 THE CD/DVD of 'Legacy' by modern worship's Planetshakers is out now through Integrity Music. The CD features songs recorded live in Melbourne, Australia; Manila, Philippines; and Kuala Lumpur, Malaysia and is packaged with a 10-track DVD. As well as tracks from the EPs 'Legacy Pt 1' and 'Legacy Pt 2' the project also includes four tracks recorded in Melbourne and features worship leaders Sam Evans, Joth Hunt (who produced and mixed the album) and Rudy and Chelsi Nikkerud. A Digital Deluxe version and a song book are also being released alongside a Spanish-language version of the album, 'Legado', in November.