From 8th-11th July down at Ashburnham Place in Battle, East Sussex, there is an event called Uprising Europe, particularly for young people. To find out more about it Jonathan Bellamy chats to JJ Waters, the director of Uprising Europe. 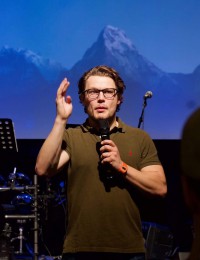 Jon: People may or may not be familiar with the name Uprising Europe; it's a new initiative here in Europe. Could you summarise what it is?

JJ: Uprising is a movement that came out of Asia, as a heart and passion to gather young people together from many denominations and to pray for awakening in the church in that generation. Specifically in Uprising Europe we have this vision to gather people from every nation in Europe. We want to bring people of all generations, all denominations specifically to pray for an awakening in the young generation across Europe.

Jon: You mentioned the origins in Asia; it's not just something that originated there but it's moving around the whole world isn't it? That seems different. Often things start in America then move around the world, like worship music for example. Is it significant that this is coming from Asia? What do you think God's done in Asia with young people that they caught something that is relevant for the world?

JJ: Great question. Personally I would say that right now the global prayer baton is currently with Asia. I was in Indonesia earlier this year when there was a global Uprising gathering and their pastors built 12-storey prayer towers where they have non-stop night and day prayer. And they're seeing revival in many churches. There was Awakening in Korea and now incredible things in nations like Indonesia. What happened was that in 2012 there was a gathering called the World Prayer Assembly and a lot of the prayer movement can be older people. But what if we did something for young people, by young people to really stir the hearts of that generation to worship and pray fro their own nations.

Jon: Have you been in one of those gatherings with young people in Asia and if so, what did you witness there that you think young people can learn from here in the West?

JJ: I was in Indonesia in January and there were other significant gatherings in Korea a few years ago. In Indonesia I saw a hunger from the young people; a real hunger, a real unity - people coming together from multiple different churches. And I think it created a space for young people to honestly learn and practice how to pray. One of the things we're really excited to do at Uprising Europe is running seminars; we want to practically equip young people in a lifestyle of worship, prayer, fasting, evangelism. So we're going to run seminars and it's also a space where young people can see how exciting prayer can be. There's this funny slogan someone quoted to me, 'we want to make fasting cool again'. I really believe that when God breathes on prayer, it's the most important meeting a church will ever host.

Jon: Thinking of spirituality and the younger generation here in the west, I wonder whether in Asia there's more of a spiritual awareness generally in the culture. Is it because there are different types of religion out there, an animist perspective? Here in the west we are quite secular minded, aren't we? We kind of debunk faith a bit and God and that kind of thing. I'm wondering whether part of the challenge is for western kids, do they have the same sort of hunger for spiritual things. What do you think?

JJ: What I see in Europe and the west generally is that through post modernism young people have got tired of religion and 'churchianity' but they're no less spiritual. I'm involved in events and movements like David's Tent and the Burn 24-7 where we're seeing young people really want raw encounters with God. I was just at an event called Awakening Europe where over a thousand young people ran forward to give their lives to Christ. I believe that whilst on the one hand people might be getting bored with certain aspects of religion, they are no less hungry for God. They are no less hungry for spirituality. Often they are finding that in different places. Certainly within the church we are seeing a fresh awakening, a fresh hunger for things like worship, prayer and a move of the spirit.

Jon: Is there a sense that young people may be desiring more than they are currently getting say in their established church settings and out of that hunger they could tap into things that could be a part of putting a freshness back into the UK church?

JJ: That's right. Honestly, that's my experience. I love the local church; I'm pro the local church. I helped start worship nights and prayer nights to give people space so they could get more than 15 minutes on a Sunday morning. That's exactly what I'm seeing. Friends of mine just hosted a hundred hours of worship up in Chester and people were there the whole time. Young people want more; they want the space to encounter God. Obviously, what then happens is it becomes a blessing to the local church. Young people go back on fire; they start attending the local church prayer meetings and hopefully are a blessing to it. That's our heart.

Jon: How do you encourage young people to keep that fire going? We've all been to events and you're with hundreds of thousands of other people, you get built up and you're going for it. It's not hype but it's that experience there. But then you go back to your setting and there's nobody else like that. How do people hold on to that hunger that it truly becomes who they are in their spiritual daily walk, not just at an event? 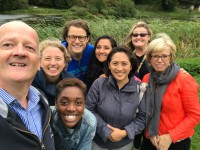 JJ: That's why we are passionate to run seminars as well. All of the seminars are people that live this out. We're not looking for big names but for people who are walking the walk with God. I'm excited to give the practical tools of what this looks like, and also to give lots of examples. We invite missions' organisations, prayer movements, worship movements and give people permission to do it themselves. We're breaking down the walls of competition in this young generation saying there's this model of starting a house of prayer or there's this one of a worship night at your local church; just giving people ideas and permission to live a radical lifestyle for Jesus. And what I've seen is that the young people go off and do it! They often overtake you and challenge you and spur you on.

Jon: How important are different generations to sustaining something like this? You don't just invite young people to the event; you also invite the older generation, parents and grandparents and they are a part of it. Tell us what happens and why that is important.

JJ: It is critical. I only stepped into this because some amazing spiritual fathers called me and challenged me into it. For us, that scripture in Malachi 3, the restoration of the son to father and father to son is really critical. God wants to do this. So one of the key things we are doing is to invite all generations but to pray specifically for this generation and in that make sure there is a culture of honour from the young to the old and the old to the young, acknowledging there are things we both have that the other doesn't. There will be times at Uprising, especially on the last day, where we have moments of prayer between the generations.