From Gangland To God

Jonathan Bellamy spoke with the 'Beast of the North East' 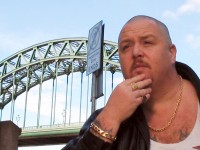 Davey Falcus has a remarkable story. For years he lived a life of violent crime and was a notorious gangster in the tough streets of Newcastle upon Tyne, but all that changed in 1995, when he had a dramatic encounter with God. Now a Pastor seeing healing miracles, Jonathan thought he'd find out more.

Jonathan: Now, such was your reputation as a hardened criminal you were known as the Beast of the North East, I believe. Tell us about that.

Davey: I had a reputation for violence, working for the region's top drug firm. You know it was something. I had a background of organised crime and that was the violent world I lived in, you know. For most of me adult life I was in and out of prison. I became part of the firm that controlled the drug scene.

Jonathan: How did you get into that in the first place?

Davey: I suppose it was around as a child. I didn't have the best start in life. I was adopted at six weeks old. Me mother had committed suicide. I was adopted by a Bible believing Christian family, and I had a loving first few years of life. They put a lot of love into us, told us about Jesus, you know.

Death hit me family when I was about five or six years old, in the space of two years, I lost five members of the family including me adopted mother. Lost me adopted mother, so I lost two mothers by the age of six you know. I became angry. Angry at the world, angry at God and started to misbehave myself.

I started drinking, about seven or eight years old, misbehaving, stealing out of shops, things like that, started to get locked up and by me tenth birthday, you know. And really I obviously had a serious behavioural problem and I think I just went on a slippery slope.

At thirteen I was in care. At sixteen I was carrying a gun. I was getting locked up and almost for most of me teenage years I was in and out of one offender's institution after another. And I suppose just as I got into the drug scene I got into dark security working as a bouncer. Working with all the major crime families in Newcastle and involved with people from London to Glasgow. I suppose I started taking drugs at a young age and just got into that scene, you know. So it was really from childhood it started and sort of progressed into organised crime. That's basically it, you know.

Jonathan: It sounds like once you were kind of on that staircase, you just kept going down and down and down in terms of the level of what you were getting into. But that changed in 1995 didn't it. I mean, you managed to come right out of that. How did that happen? What happened exactly?

Davey: Well I suppose like you say, I was on a slippery slope. I was involved with the top firm in the region and even got approached by people of the Kray's firm. And that's the sort of serious crime I was in. I suppose there comes a time in your life when you've got to say enough is enough and I was getting sick of all those shootings and stabbings. I had me friend dead. I just came to a place where I was a drug addict, I was an alcoholic and I needed peace in my life.

And so I started a spiritual search, which took us through a range of eastern religions, but I didn't find any answers there.

Then one day, 16th August 1995, I picked up a Bible that had been left in our house. I opened it at the twenty third Psalm. Now my story's covered in the book, 'Gangland to God' and that. And when I was young I had an encounter with Jesus. He told me, later on in me life I was going to serve him, you know. I saw him in a vision, and that, you know. I'd forgotten all about this and even though I went to Sunday School as a young kid, I had Jesus in me life, but I didn't really have a personal relationship with Jesus. I mean, I didn't understand how it worked; but 16th August 1995 I'd opened the Bible at the 23rd Psalm. The Lord is my shepherd. I realised it was Jesus I needed. I remember falling on me knees and crying out to God.

I'd searched me way through all those other things, I said, "If you are really God and you can sort me out, I'm yours." At that moment I remember just collapsing back on the bed, a bright light filled the room. I thought it was the sun at first, and then there was just a beautiful peace that rolled over me body.

I think that should say Ashington Family church?

AMEN!!! I was captivated by this article and I thank God that He saves those who we as human beings would describe as 'the scum of the earth' but God sees them as the mosT precious of diamonds to be saved, restored and shown off for all to see. God is good! God is more than good - no words could describe. Amen.I know this may sound like a cliche but really, my soul is blessed.