John Wycliffe: A forgotten hero of the faith

Michael Marcel shares the story of the foremost philosopher and theologian of his age, not only in England, but also in Western Europe. 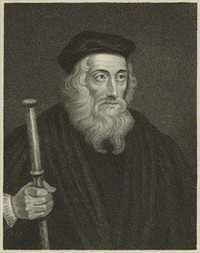 This forgotten hero was a brilliant man, who very nearly changed the world forever. He had similar revelations from the Bible to those of Martin Luther nearly 150 years later, so he is known as the Morning Star of the Reformation. But sadly, the Pope was able to snuff out the fire he lit. His name: John Wycliffe.

Wycliffe was born near Richmond, in Yorkshire, around 1327. He was the most brilliant mind of his generation. He went to Oxford University in 1345, rising to become Master of Balliol around 1360. Soon after he arrived at Oxford, England was torn apart by the Black Death, with 30-40% of the population wiped out, including perhaps two-thirds of the clergy. It is impossible for us today to fully grasp the impact this had on English society.
Until 1371 Wycliffe led the life of an academic, studying and teaching. He became recognised as the foremost philosopher and theologian of his age, not only in England, but also in Western Europe. He was an expert at debate and arguing, which came in very handy.

In 1371 he began to write, generally against the clergy and the Pope. He recognised how corrupt the Church system was. Apart from the enormous wealth of the Church, which was much resented, there was little spreading of the gospel. The plague had reduced the numbers of clerics so much that many unsuitable men filled the gap, so the preaching of the gospel was more the preaching of myth and legend.

He also wrote political pamphlets for his patron, the Duke of Lancaster, who was the king's third son and one of the most powerful men in the country. Wycliffe wrote that the gospel was the only source of religion and that the Pope could be reprimanded by even laymen if he did wrong. Needless to say the Pope wanted Wycliffe arrested. He was called several times to defend himself in front of the Bishops, but he was never arrested because of the protection of the Duke.

1378 brought the great Schism where the papacy was split, so years of infighting meant that there was no interference in England or attacks on Wycliffe. It also put Wycliffe into retirement, as he was not required to write political pamphlets anymore, so he retired to his church in Lutterworth, Leicestershire.

These were the years that crystallised his undying reputation as a reformer. One of Wycliffe's main teachings was on the authority of Church leaders. He said that God's grace was available for all Christians, whatever leaders had to say. He not only attacked Church authority, he also attacked the superstitions of the Church such as the selling of indulgences, which were one of the Church's main sources of income.

He went back to the New Testament as the model for the Church and Christian living, as many revivalists, like John Wesley did in the years ahead. He came against the idea that a layman needed a priest to be the mediator between him and God; everybody had access to God directly. He believed in the priesthood of all believers. He attacked the Eucharist, he attacked the Mass, and he attacked transubstantiation, pointing all his arguments to the Bible. Small wonder that he was not exactly popular amongst the powers that be - he was attacking the very foundations of society.

Wycliffe was the driving force behind translating the Latin Vulgate Bible into English; stripped away of all the notes that that been added over the years, giving the people the pure Word of God. This was the first time that most Englishmen were able to read the Bible. There are still over 100 copies of Wycliffe's Bible existing today, over 600 years later, despite the Church's efforts to destroy every copy.

Wycliffe's followers, called Lollards, began preaching these ideas around the country, bringing a revival to the nation. They were humble men, dressed in simple robes, like monks. Although what they were doing was against the law, they became very popular amongst the people. However, the Peasant's Revolt of 1381 was used as an excuse by the Church to attack Wycliffe's ideas and his followers. Wycliffe himself was left in peace; dying in 1384, but many of the Lollards were burned at the stake at the beginning of the new century. In 1428, as an act of revenge, the pope ordered Wycliffe's bones to be dug up, burned and thrown into the nearby River Swift.

John Wycliffe is considered to be the grandfather of the Reformation. His ideas were taken up by John Huss and Martin Luther. He was an immensely brave man who obeyed God's call on his life. He knew what was right and he knew that he had to speak out, whatever the personal cost. There is as great a need today for us to speak out truth, just as Wycliffe did, without fear and ignoring intimidation from those who want to be politically correct.