John Knox: A forgotten hero of the faith

Michael Marcel shares the story of someone who laid a large part of the foundation stone of the Reformation in Scotland. 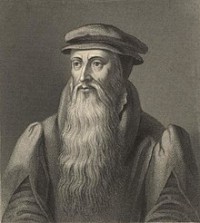 This Forgotten Hero said, "Give me Scotland or I die!" The man who said that had a passion, he had a vision. Would you say that about your nation? He was a great reformer, his name - John Knox.

Knox was born in Haddington, a few miles east of Edinburgh, around 1510. He was influenced by the early Protestant martyr George Wishart as he spent several weeks with him as his bodyguard. After Wishart's execution Knox was in danger himself so he moved around for the next 15 months. In 1547 he went to St Andrew's Castle, where fellow reformers had fortified themselves against the authorities and began sharing his thoughts about the burgeoning new faith. People recognised the quality of his ideas, so he was asked to preach, but Knox did not accept until he had locked himself away in prayer for several days and heard from God.
Previous preachers had advocated a reform of the Catholic Church, but in his first sermon Knox spoke against the whole papist system, causing quite a sensation. The authorities then attacked the castle with the help of a French fleet and those who were not killed, including Knox, were put on ships and taken away. Knox became a galley slave for 19 months.

For the next five years to 1554 Knox was preaching in England. The Reformation was in full flow there and his preaching was very popular - he was even offered the bishopric of Rochester, which he declined. However, on Catholic Mary's accession he wisely left for the Continent. For two years he travelled around France, Germany and Switzerland; having many discussions with other reformers like Calvin.

Returning to Scotland he found that the seeds he and others had sown had clearly done their work in the years of his absence. He wrote, "If I had not seen it with my own eyes in my own country, I could not have believed it...the fervency here exceeds all others that I have seen." While in Edinburgh he successfully persuaded some of the leading nobles to stop going to Roman Catholic worship or mass. They showed their resolve by receiving the Lord's Supper from Knox. The first foundations of the Reformed Church of Scotland had been laid.

Knox's preaching caused anger with the bishops, so he went back to Geneva for four years, to the church he had started on his last visit. Whilst there he wrote a great deal and it must have been a time where he refined his reformation theology, as Geneva was a melting pot for reformers. He was one of the contributors to the Geneva Bible that was to become the most popular Bible of its day.

Knox was the man sent by God to lead the Reformation in Scotland. His devotion and passion, his sincerity and honesty; his magnanimity and courage; his skill in theological debate and his political insight, the confidence and hope with which he was able to inspire his fellow-countrymen; and the terror in which the bishops showed at his very name, all marked him out as the chosen instrument for his country's deliverance.

Some of the lords and the merchants and traders were the main supporters of a reformed Church. On his return, these lords resolved to set up Reformed worship at once in all those places to which their authority extended, and where a majority of the inhabitants were favourable to the idea.

It was arranged that Knox would go to St Andrews to set up Protestant worship there. Despite threats from the archbishop that he would be shot, Knox bravely went and preached in the parish church on three consecutive days to packed congregations and not a hand was lifted against him. The magistrates and townspeople assembled and came to a unanimous resolution to set up Reformed worship in the city. The church was stripped of its images and pictures and the monasteries were pulled down. The example of St. Andrews was quickly followed by many other places in Scotland. The Reformation had begun.

That year was one of incessant and Herculean labour. Knox's days were spent preaching, his nights writing letters, rousing the country, he kept it awake. His voice like a great trumpet rang throughout the land, firing the lukewarm into passion and inspiring the timid into courage. Parliament declared in August 1560 that Protestantism was to be the faith of the nation. Knox would make it so in fact. He died in 1572, but not before setting out the structure of the Reformed Church - Presbyterianism. There were many battles ahead to preserve it, but Knox had laid a large part of the foundation stone.

What a remarkable man John Knox was. He had a passion and a vision. Some say he was the greatest ever Scotsman. However, some people criticise him. A friend told me that he was recently with a minister, when they heard a woman tour guide tell her tour some untruths about Knox and she then spit on his memorial. She probably did this having seen a play that was in Scotland at the time showing Mary Queen of Scots as being a great heroine and John Knox, virtually the devil. There is a danger in these times of Identity Politics that history is re-written to suit someone's agenda. Just because I am standing here speaking about John Knox, do not assume everything I say is accurate; check it for yourself. These days nearly all media is hugely biased; never accept what someone says to you as truth. God has given us Holy Spirit to discern the difference between truth and lies; we need to use Him.

We need John Knoxes to rise up today; men and women to be trumpets in our land, to fire up the lukewarm and usher in a new spiritual reformation to transform the United Kingdom.