William Haslam: A forgotten hero of the faith

Michael Marcel shares the story of someone who brought revival wherever he went. 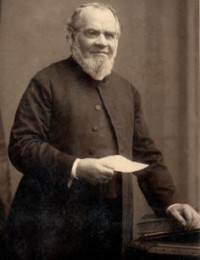 This forgotten hero, once properly saved, brought revival wherever he went. Oh that that were the case with me! I love this man, his name: William Haslam.

Haslam was born in 1818 in Sumatra. He left Durham University in 1841 and was about to be ordained and engaged to be married, when he received a delayed letter to say that his fiancÃ©e was dying. His grief brought about an inflammation of the lungs from which he nearly died.

Although he was going to be ordained, his faith was more to do with rites and ordinances than Jesus and the Bible.

The doctors recommended he go to Cornwall for his health, so he was ordained and became curate of a large parish in Cornwall, but after five years he was appointed to the nearby parish of Baldhu.

There was no church, so he built one and settled down to preach holy living rather than conversion. He never prepared a sermon as he only read out other people's. He wanted to do some real good for the people, but he didn't know how.

One day in 1851 his gardener was converted, which saddened him because he thought he was deceived. Haslam visited him when he became seriously ill and started to tell him how deceived he was when the gardener told the vicar that he wasn't saved.

Haslam became depressed, but fortunately there was a revivalist not far away, so he went to tell Robert Aitken his troubles. But he did not get the comfort he was looking for, because Aitken also told him he was not saved. Aitken spent a long time telling Haslam about Holy Spirit and as a result he had a tortuous night and was in despair for three days.

On the Sunday, he decided to close the church until he was converted. He spoke a few words about the day's gospel reading and then was going to dismiss the congregation, but he felt a wonderful light and joy come into his soul. All of a sudden a visiting preacher stood up and shouted "the parson is converted, the parson is converted!" Three or four hundred started to shout praises and when the uproar calmed down he found at least 20 people crying out for mercy. Revival had come and would remain for three years!