Thomas Bilney: A forgotten hero of the faith

Michael Marcel shares the story of one of the first Protestants in England and one of the earliest martyrs. 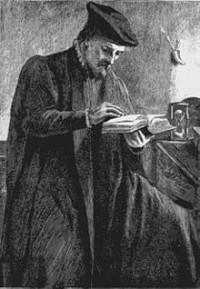 This forgotten hero was a truly remarkable man who was one of the first Protestants in England and is known as the Father of the Reformation. His name - Thomas Bilney.

Bilney was born around 1495 near Norwich. While at Trinity hall, Cambridge he was very distressed and he tried to get relief by taking the advice of the priests. He was advised to fast, to do prolonged vigils, go to mass and pay indulgences, but none of these worked - what a surprise!

One day, he bought a copy of the banned New Testament translated by Erasmus. He hoped that these words of God might bring him some relief. The verse that converted him was 1 Timothy 1:15 "Here is a trustworthy saying that deserves full acceptance: Christ Jesus came into the world to save sinners, of whom I am the worst."

William Tyndale (the man who translated the Bible into English) arrived in Cambridge and with John Fryth (the future martyr) the three of them would meet together to discuss and formulate this nascent protestant theology. Oh, to have been a fly on the wall!

These young scholars set to work with enthusiasm. They declared that neither priestly absolution nor any other religious rite could give forgiveness of sins; that the assurance of forgiveness is obtained by faith alone; and that faith purifies the heart. Then they told everyone that saying of Christ's that so offended the monks: Repent and be converted! It is difficult to overemphasise the revolutionary aspect of these declarations.

This happened in 1519 and was the start of the Reformation of the Church in England.

Bilney led several influential people to Jesus. One was Hugh Latimer, the future bishop and martyr. Latimer was a much-respected Fellow at Cambridge and he was very distressed at the direction Thomas Bilney was taking and he wanted to bring him back to the true faith. At the same time Bilney wanted to convert Latimer and the Lord told him to ask Latimer to hear his confession. Latimer thought he was about to win back Bilney, but in fact their meeting resulted in his conversion.

In 1526 Bilney was called to London and told not to preach these new doctrines but he continued to preach powerfully around the country.

The following year, the authorities lost patience with him and put him in the Tower of London and he was tried before Tunstall, Bishop of London. But Tunstall was reluctant to give Bilney the sentence of death because Bilney was one of the most admired men in the nation, loved not only by his friends, but also by his enemies.