George Fox: A forgotten hero of the faith

Michael Marcel shares the story of the founder of the Quaker movement. 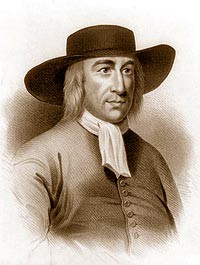 This forgotten hero set himself apart and despite extraordinary persecution he persevered, forming a movement - the Quakers - his name George Fox.

Fox was born here in Fenny Drayton, Leicestershire, in 1624. His parents were known for their godliness and gave their son a very good religious education. He was a serious boy who spent his time reading the Bible and conversing with the vicar. It was thought that he would go into the Church, however the Church that Fox knew was not for him.

He grew up in an England ruled by Charles I and Archbishop Laud who wanted the people controlled by a hierarchical Church of England, leaning beyond Anglo-Catholicism towards Catholicism, which later resulted in Civil War.

Fox heard the Lord say that he must set himself apart from other young people and seek Him. So for a few years he wandered the countryside, spending much of his time in prayer and fasting. It was in these times of prayer Fox received revelation from the Lord that would form the basis of Quaker beliefs. Three of these were:

1) Christians were 'saved' because they passed from death to life, and their hearts were regenerated.
2) He realised that to be a minister of the gospel one had to be filled with Holy Spirit.
3) And God created the world so is not confined to church buildings.

Fox stopped going to his church as he felt it more important to hear the Word of God directly from the source than through a vicar. I do not know what this says about the vicar, but in those days this would have been the only church Fox could have attended.

By the time he was 23 Fox felt that he needed to tell others about what he had learned from the Lord, so he left home in 1647 to preach the gospel.

Fox attracted large crowds. He spent considerable time in prayer and in the presence of God, which is the key to success in any ministry. He received revelation and visions from the Lord; he prophesied and healed the sick through the power of Holy Spirit. Although common place today, it would have been virtually unheard of in the seventeenth century.

Fox was very bold, never being slow to speaking out 'home truths' that made people feel very uncomfortable. In today's language he offended many and as often happens when people do not have the words to oppose something they disagree with, they turn to aggression. Fox was often beaten up and imprisoned.

In 1652 Fox came to Pendle Hill in Lancashire and the Lord told him to go to the top of it. Once at the top the Lord showed him where he must go next in his ministry and he had a vision 'of a great people, in white raiment, coming to the Lord.'

From Pendle Hill he visited Firbank Chapel where the numbers who came to hear him speak were so great that he sat on a rock outside the Chapel and preached for three hours. Many became Quakers at that meeting. I have been there many times; it is a truly beautiful spot.

Despite there being freedom of religion under Oliver Cromwell, many felt threatened by the Quakers and they were often attacked or imprisoned. With Charles II taking the throne in 1660 it was far worse, with thousands of Quakers imprisoned. They believed in Matthew 5:34 that tells us not to swear. When arrested they alone were made to swear in court an allegiance to the King; something the judges knew they would not do, so they were imprisoned. Hundreds died there as a result. Think of this - which verse in the Bible would you be prepared to die for?

Fox was imprisoned unjustly nine times and in the most atrocious conditions. In Launceston Prison in Cornwall, prisoners in the cell above used to defecate and it would fall down into Fox's cell. His health was severely impacted by the inhuman conditions in the prisons.

From 1673 he spent most of his time looking after the affairs of the Quakers, and George Fox died in 1691 at the age of 66 and is buried in Bunhill Fields cemetery in City Road, London, but as with all Quakers, there is no marker to his grave.

How many of us today would carry on while suffering the persecutions he did? His heart and mind were always on the Lord and he achieved much. At the time of his death there were an estimated 50,000 Quakers in this country and many others abroad, particularly in America. Sadly, the movement today in the United Kingdom is not what it was in his day. Oh, that the Quakers today could be restored to the fiery ways shown by George Fox.