In part 1, Jonathan Bellamy speaks with Michael Cassidy about growing up in apartheid South Africa, and his stand against racism on a worldwide stage.

As African nations shook off colonialism in the 1960s, a singular figure burst into prominence. A son of apartheid South Africa, Michael Cassidy appeared an unlikely candidate to bring a message of hope and reconciliation to a continent overturning white rule. But Michael saw clearly the need for quality leadership and fostered vital dialogue amongst top politicians in the tense run up to South Africa's 1994 elections. As the country hurtled towards a civil war he helped broker a last minute settlement paving the way for the peaceful inauguration of Nelson Mandela. Now he's released his book, 'Footprints in the African Sand, My Life and Times' and Jonathan Bellamy caught up with him to hear his story.

Jonathan: You like to describe yourself as a son of apartheid South Africa, what was it like for you growing up under those conditions?

Michael: I grew up in old Basutoland, now known as Lesotho, but I did my prep schooling in Johannesburg, so I was very much a part of apartheid South Africa. I also did my high schooling also in South Africa.

I was very aware of what was happening. I was politicised when I was only about 11 or 12, by an older friend that I admired, a sort of childhood hero called Patrick Duncan. He was passionately anti-apartheid. He was the son of the former Governor General of South Africa, Sir Patrick Duncan, under Smuts' Government. He brought home to me, especially in 1948 when the National Party came to power, that this was a tragedy of first order. 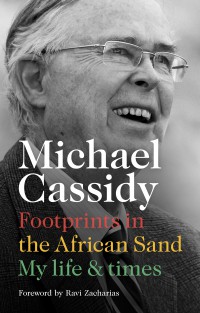 From then on, even as a child and a teenager and a young adult I was passionately opposed to the apartheid system.

Jonathan: Did you always see apartheid as being wrong, or did you have to go through that transition to be able to see it? Before that, did you have a different, a more racist kind of perspective?

Michael: No, I never had that because my parents weren't racist.

I was growing up in a British colonial territory, as you might say. I never had racist feelings.

There was a certain accepted social status quo, even in Basutoland, that whites and blacks on the whole didn't mix very much socially. But they were together in seeking the well-being of the territory.

Racism was not something that I felt deeply, but it never came home to me with the full force of the terrible travesty of justice, which the system was, until Pat Duncan really began to speak to me about it.

Michael: First of all we resolved that our team would not be mono-racial but non-racial. So that in itself was a visual, personal kind of incarnational message speaking against the system, just the way we operated as a non-racial team.

Then we insisted in our missions that they should be non-racial, that we should have non-racial seating in the various halls or stadia that we used. This wasn't always easy and sometimes brought considerable hostility from the Government and even direct opposition. But we stood our ground.

We also launched a number of very significant conferences and congresses, which we managed by God's grace to make interracial, once again having to weather the storms of assault on us by the National Party Government.