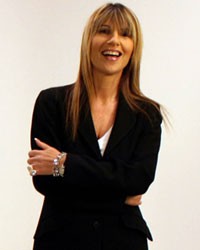 For lovers of CS Lewis and JRR Tolkien, taking in fantasy, thrillers and suspense woven with Biblical truth, a new author is emerging and gathering hungry readers of her works worldwide. Wendy Alec, co-founder of the hugely influential global TV network GOD TV is also an exceptional creative writer of cant-put-down fiction. The first two in a planned set of seven books in the Chronicles Of Brothers series are now available. The first, 'The Fall Of Lucifer' sets the scene in the pre-Creation heavenlies as three brothers, archangels Michael, Gabriel and Lucifer wrestle the effects of Christos' plans to create a new race, the race of men. The second, 'Messiah, The First Judgement', is a rollercoaster of energy and emotion as the story of the fall of man and the rescue plan of Christos are set in full motion amidst the threatening darkness of the wiles of the Prince of Perdition! The following is an extract from the beginning of the brand new 'Messiah, The First Judgement', which starts with a Prologue extract from the first in the series, 'The Fall Of Lucifer'...

The tempest built with the force of a cyclone, and a torrid inferno rose out of the blackness, illuminating the entire panorama. Lucifer lifted his forearm from his face, his mouth opening and closing mindlessly in terror as an all-consuming apocalyptic sheet of flame descended onto his angels, the scorching, incinerating flames engulfing them. 'The consuming fire!' he shrieked.

All across the chamber, spine-chilling screams resounded as the renegade angelic host were consumed by the blistering fireball.

His deranged screaming resounded through the darkness as the searing tongues of fire started to engulf Lucifer. He looked down incredulously at his hands. As he watched they blistered. His broad, manicured nails twisted into talons and yellowed with age. The chiselled alabaster features became pockmarked. The jet-black eyebrows grew together. The beautiful aquiline nose became misshapen. The passionate crimson mouth grew thin and cruel.

Frantic, Lucifer put his hands to his cheeks, feeling his mangled, misshapen features. The magnificent thick ebony tresses fell from his scalp in smouldering clumps. His gold and ruby ring burned deep into his flesh.

'Hear me, Christos!' he screamed. 'I, Lucifer, Light-bearer, chief prince, holy angelic regent of the Royal House of Yehovah, do now become Your sworn enemy, and treachery and iniquity will I bear unto You throughout eternity of eternities!'

Gale-force wind blew through the chamber. The angels with Lucifer - themselves hideously transformed - clung desperately to balustrades, marble columns, and overturned marble tables as they were sucked away from the throne room. They screamed frenziedly as the lightning raged.

Then, propelled by some unseen gargantuan magnetic force, they and everything in their wake were sucked towards the swirling black vortex beyond the chamber entrance.

The shadows had fallen...

The dark, imperial figure stood on a jagged outcrop beneath the towering granite slopes of St Michael's Mount. His indigo cloak billowed in the violent gales that blew up from the raging winter storm in the English Channel.

I just finished reading 'The First Judgement '. Sadly pages 420 to 425 are missing. Wish somebody can tell me what they are.

I have always been interested in angels. 'The fall of Lucifer'was very original and written in a style I can't quite describe, mind blowing is the best I can do. I'm enjoying the second book also. would recommend these books to anyone

I have read all the books, last year i finished A Pale Horse, thank you to my son who got me to read these books, and was wondering if there is another book to follow up on the above. My son passed away last year and in his talking to me he was telling my about God and I was taking all in...about his telling of God,, Amen

read the first book and it was amazing! really wish I could get hold of the second book though.

Hey!!! I just ordered Wendy Alec'c Fall of Lucifer and Chronicles of the Messiah. I am sooo looking forward to receiving them I have heard great things., May God continue to Bless God TV

At first i must compliment Wendy for such an excellent book. it was my fisrt time readig such an uplifting and eye opening book. it broadens once;s mind wrt God and His wisdom further more, it elaborate more of the bible as we have many versions

from my side it removed the cloud, openned few of the veins and broadenned the scope

am blesssed by God TV but unfortunately i can not afford the shipping and handling of nay book [not even one] of the boooks currently on offer in your end time series. i hope you guys will visit malawi soon but Roly Alic please my sister send me some more extracts of all your books to my mail box. God BLESS YOU and the whole GodTV team, we appreciate the good work you are doing.

I HAVE ORDERED BOTH BOOKS. WOULD YOU LIKE ME TO POST THEM TO YOU IN AFRICA WHEN I HAVE READ THEM? I AM VERY HAPPY TO DO THIS FOR YOU!

I have waited for this book of Wendy's to be printed, I loved the first one and it opened my eyes and heart to a greater understanding of heaven and just what it cost God to give us Jesus.
I am so looking forward to getting hold of a copy and to sit down and dwell in the company of such an awesome writer but also of Heaven and the complexities of that awesome place. I am currently re-reading Tha Fall of Lucifer in order to be in the right place to contnue with this next one...I will then await the third in the trilogy with anticipation.