Sarah J spoke with Professor Roy Peacock, a former atheist and well established scientist and advisor to many government bodies and industrial companies in the UK and overseas. 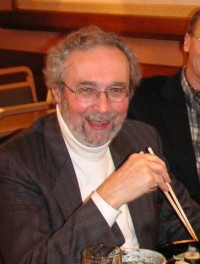 Sarah: So what areas of science are you most passionate about?

Roy: My basic - my home patch is in the field of thermodynamics. Don't ask me about it because I can't even spell the word. But in application I'm mainly interested in Gastro Irons. And have been involved in researching them and designing them over most of my life.

Sarah: I understand that you've advised Governments on certain issues?

Roy: Yes yes, absolutely. UK, United States, Indian and one or two others.

Sarah: So you've been quite high profile then in the kind of work that you've done?

Sarah: How as a scientist did you get to the point that you believed in God?

Roy: Well that's a question - I think it's a very pertinent question - but it could be addressed to a number of scientists, not just me. The great scientists of history, not entirely, but to a large extent, have been Christians; not just in name but in their experience and life. I could quote people like Galileo, whose private papers I've had access to, he clearly had a dynamic relationship with Jesus Christ. Or people like Kepler, who as an astronomer discovered a thing called Keplerian ellipses, which indicates how planets go around the sun and things like that. All these people were Christians. Michael Faraday, the man who sort of laid down the principles by which we now have electric light, and his successor, James Clark Maxwell, were both vibrant Christians.

I began my questionning from the point of view of design, what we observe in life. How was it I could look down a microscope and see a pattern, and I could look up into the sky, the two extremes in terms of spatial size, and I could still see patterns and organisation. That was the first question I asked myself. So there's lots of illustrative evidence there. But the ultimate evidence is in one's own heart. That's where it counts; and that's where it happened with me. It was the establishing of a heart centered relationship with a God - who previously I didn't even believe existed. But suddenly I knew was there.

Sarah: So how did that happen for you? You didn't believe God existed then all of a sudden you knew He was there.

Roy: I think the starting point was for me to say this. I was brought up to go to church. My parents had decided we needed some religion in the family so I was sent to church. That was the essence of it. But as time went on I began to discover that my church going, I was living an illusory sort of life. Nothing I did in my church or religious life seemed to have any bearing whatsoever on what I did in the rest of my life. And I drifted away from any religious concept, if I could use the word religious in that context. And then when I went up to do research at Cambridge I found myself sat at the knees of great men and I discovered that none of them seemed to have any interest whatsoever, or ever made any reference to anything that was religious, to God, Jesus Christ, the Bible or anything of that sort. And they were very focused people. I decided, well if this is how they achieved greatness, if I was ever going to achieve greatness, which incidentally I didn't; if ever I was going to achieve greatness then I would follow the same path. I would dispense with any concept of God - so really I became an atheist to the point that I was prepared to go out, which I did, onto street corners, where I would find people on soapboxes preaching and I'd challenge them publicly; and I used to do quite well at it actually. So I was very hardened in my atheistic ideas, and it was at that point, I was just finishing my research at Cambridge at the time living in a village just outside. A mission came to the village, of which I had no interest whatsoever; and it was during the course of that week that my eyes began to be opened to the fact that there were people around me, in particular the missioner who I personally disliked; the missioner certainly had something in his life, which I'd never seen before. And then to my horror I realised that what he had I wanted. And that led me down a fairly short path, an agonising one in a sense, where I tried to disprove the existence of God, from a scientific perspective. I mean I'd spend most of the week doing that and finally, late one night about two o'clock in the morning actually, I was in bed and was unable to sleep, and I had what can only be called a revelation. I saw a vision to be quite frank, and I heard the voice of God speaking to me. Now for somebody who didn't even believe the existence of God, to hear a voice, and not so many people do hear voices, you know, my first thought was, gosh am I drunk or did I have too many pickled onions for supper. But I knew this was real, and within eighteen hours I had made a commitment of my life, not knowing where it was going to take me, to the God whom I didn't even know, but in the moment of commitment, I realised that not only was he real, but he showered me with the most amazing sense of peace and fulfilment. Gave to me a joy inexpressible if I can put it that way. And a sense of destiny, although I didn't know what that meant. But I knew my life had been changed fundamentally and it stayed that way ever since.

Sarah: So now as a Christian how do you view science?

A beautiful testimony of Gods faithfulness to His people. I shall never leave you nor deser you. What an awesome Hod we serve. Thank you for your story. God bless always.

Just read Foolish to be Wise. Could you pray that at the right time I share this book or similar with my son who works for Microsoft and my Godson who is going to work in Harvard Uni - both very bright in their fields. Both would benefit from their very own a personal encounter with Jesus. Thanks. L.

I very much enjoyed Roy's comments. A good friend just passed away and her daughter gave me a few of her books that she thought I might like. One of the books was Roy's first book. I loved it! Great stuff! The book was older so I wasn't sure Roy was still around. Thanks for answering that question. Roy and I have many experiences in common. "My Sheep know my Voice" has many of my encounters in print.
Thanks for posting your interview with Roy

I am so pleased to have conformation of my own
experiece of hearing a voice from God some ten years ago. Contact on several occasions since has
led me to a singular ministery of ensuring his choice
of servants is awakened in specific persons I have have met by chance,and then only once

I know nothing about thermodynamics, but having known Roy for nearly 25 years I do know something of this man of Faith. Many times I have witnessed lives changed as Roy has spoken about Jesus Christ.I guess scientists will always disagree on certain issues,but the plus for Roy is that he knows the person who created this wonderful universe, thermodynamics and all!!

I will join Peacock in being an academic (PhD Linguistics, 2006, Sheffield) and also join him in knowing that science is an investigation into what God has created. I had spent a life hammered by crushing inferiority since childhood and so when I felt His presence in church in 1999, I said I would believe if He would heal me. He did!! Read about it in my website:
http://www.invernesscoffeeroasting.co.uk and click on my story.

Very silly comments by Peacock. He is not even a natural scientist, more of an engineer. Perhaps when he is in his aeroplane he thinks he is closer to God and therefore that he is a "scientific" expert on Cosmology?

I too found your comments a joyful event.
What I wonder makes you an authority on thd.
It seems that the two laws apply to Salendra and Peacock at this crossroads point in time.
The third O is O..so what does theory mean..I'm laughing now.

I found this an hilarious spoof... until I did a web search for "Professor Roy Peacock" and discovered he's for real. Though I do wonder who would consider him an "authority" on thermodynamics. Aeronautical engineering perhaps, but someone who refers to the TWO laws of thermodynamics and doesn't understand what the word "theory" means in science, would be laughed out of any undergraduate classroom.