Those brethren of more radical or jaded music palates may dismiss the smooth easy listening praise of Integrity Music's DON MOEN as too safe. But for a generation, his smooth as silk praise and worship concoctions are a mighty blessing. Mike Rimmer spoke to the American MOR veteran. 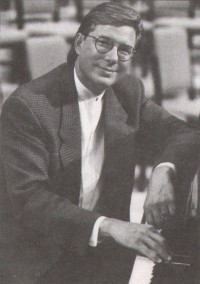 Pick up an album released through those purveyors of praise, Integrity Music, and you'll doubtless find the name Don Moen on there somewhere. He writes songs and produces. He is also a big cheese with the company and just occasionally they allow him out to record an album of his own! He's got plenty to say on the subject of praise and worship and our two trans-Atlantic telephone talks lasted nearly three hours! Before Admiral Cummings faints at the sight of my phone bill, I have to point out that Don was kind enough to call me!

I began by asking him to define his own role in life. "People are always asking how they should introduce me," Don said. "It makes me feel as though I need to get up and administrate praise and worship! In the Executive Vice President role, Creative Director is a closer picture to what I do. You don't normally have this role in a record company - it's an ad agency term. The Creative Director coordinates all the artwork, lyrics, music and overall project, and that's close to what I do. I'm trying to move away from day-to-day marketing and getting into worship ministry. The truer picture of what Don Moen is a Creative Director and worship leader."

If you've taken a close look at the credits for his recent album, 'Rivers Of Joy', you may have noticed that Don is credited with playing violin on the album. What you may not know is that violin was Don's first instrument. I muse that this is a strange choice so he took me back to his childhood. "In my little town up in Minnesota there was this violinist named Dave Rubinoff. I was in the second grade and I remember sitting with my legs crossed on the floor on the school gymnasium. Well, Dave came and played 'The Hot Canary' and he made his violin do funny things. He did some funny jokes. I was just a little kid and I went home and told my mother and father that I wanted to play the violin, all because this guy had made me laugh. That's when I started playing. But of course, I wanted to quit for basketball, because in high school sport is the in-thing. Finally my coach had enough sense to tell me, 'Don, you're never going to play for the NBA! Why don't you stick with the violin!"'

Whilst at university Don quit his course and turned his back on music for a while. He recalled, "I thought I had more interests in my life than just playing the violin so I quit and became a lumberjack way up in the freezing cold Minnesota wilderness. After several months of that I realised that playing the violin wasn't all that bad after all!" Visiting a friend at Oral Roberts University in Oklahoma, Don ended up auditioning for their orchestra and got a scholarship to go there. It was while studying there that Don took up the trombone and guitar as well a continuing with violin. He also came into contact with the fledgling contemporary Christian music scene.

Like many Christian musicians at the time, Don was influenced by the ministry of one of Christendom's pioneering bands, Love Song. It was at one of their concerts that God broke into Don's life with fresh vision. Don remembered, "They gave an appeal for people to commit their lives totally to the Lord. I was a Christian but I totally dedicated my life and my music to him at that point. Six months late I ended up joining a group called Living Sound as a guitarist."

His time with Living Sound in the '70s gave Don the opportunity to minister on the road and the schedule was punishing. Tours would sometimes last 18 months and it wasn't unusual for the young Don Moen to perform three concerts in one day. I asked Don to describe the Christian music scene back then. "The big difference is that back then there weren't a lot of groups doing this. There was Andrae Crouch and the gospel quartets but that's about it. people were much more willing to come to a concert because it was a totally different experience. Dallas Holm was doing some stuff; you had Phil Keaggy later on but it was all just getting started. Back then it was much more evangelistic. Christian music now has more of a concert presentation. Back then we travelled with an evangelist like most groups did and had an appeal at the end of the concert."

As the '70s turned into the '80s, Don worked a great deal with evangelist Terry Law as his musical director. This period of Don's life was to have a profound affect on the direction of his ministry. One critical incident occurred in 1982 when Law's wife died. Remembered Don, "I had to call him when he was in England. He had three little children and it was all a big ordeal. Through this whole process Terry was devastated but through it all he began to determine, as David said in Psalm 34 verse 1 to bless the Lord at all times; his praise shall continually be in my mouth. God really healed Terry through his offering of a sacrifice of praise in the midst of the severe pain he was going through. He said to me one day that, because of how God had healed him through offering a sacrifice of praise, he wanted all their music to be praise and worship."

The knock on effect of this time was that Don had to completely revamp the music he was using with Terry Law. The consequence was that he chose songs that were more directed to God than the evangelistic material he had previously been using. At the same time, Don himself had been going through some challenges in his songwriting. He described the changes, "I was going through a struggle -I didn't want to write music any more that touched people in their spirit and came with healing and deliverance."

In 1981 there came a night when he was woken up at three in the morning with a very strong impression to get up and turn to Psalm 40 verse 3. It says, "I have put a new song in your mouth, a song of praise of God. Many will see it and fear and put their trust in the Lord." It was a significant moment. "I sat there, stunned," said Don. "I think I was ordained into something! God had answered my prayer."

As Musical Director Don was altering the focus of the music in Terry Law's meetings but he was surprisingly uncomfortable and insecure about taking the role of featured singer so he hired someone else! Even so, it seems as though God had begun to lead him gently into his future role of worship leader. At the end of one meeting, he felt that there should be something more happening. He described the experience, "I said in this quivering voice for us all to sing the chorus one more time. That was my first fearful step into leading worship."

Don started travelling with Terry who encouraged him to sing. It wasn't the easiest of apprenticeships. "I was intimidated but every night Terry made me get up and do it even though the churches we were in had great worship!" remembered Don. "He was preaching to around 7,000 people and I was humiliated weekend after weekend! I said to Terry that I didn't want to do it any more. Terry told me to just get out there and do it!"

When he compared himself to the other Christian singers who were ministering, Don would feel even more insecure. He described his feelings, "One night they'd have some incredible singer; the night after an incredible pianist and I'd be in the middle like this piece of salami and I felt intimidated all the time. I thought, unless we quickly get into God's presence, people are going to notice that this guy can't play or sing! I determined that the only shot I have at succeeding in what I was doing was to get the focus off me as quickly as possible and onto the Lord." It is probably true to say that where God is worshipped in Spirit and truth, however faltering, however clumsy that worship is, his presence will change lives. So despite Don's lack of confidence in himself, I wasn't surprised when he described the way that God would sometimes move in meetings. He describes one such occasion, "One time I was at a church service with Terry Law and I was leading worship. We all wait for those moments when God is there. I was just singing away and all of a sudden I had a sense that God had walked into the room and I didn't dare open my eyes. This awesome presence filled the room and in those moments I stopped playing. Everybody knew we were in the awesome presence of God. When I finally looked everybody was either on their face or their knees. A 13-year-old girl who had been deaf from birth gave a testimony - her ears just opened up in the middle of that meeting. Nobody prayed for her."

Our talk turns to the current move of the Holy Spirit and we swap stories about our experiences. Don is in the privileged position of travelling and ministering in a variety of places. He tells me about his most recent trip, "I've just come back from the Philippines and a lot of people have testified to being healed in moments of worship. Every time I get up to sing I want to see 2 Chronicles 5 verse 13 come to pass, when the singers and musicians lifted their voices and sang and the house of the Lord was filled with a cloud so that the priest couldn't even stand to minister because of the glory of the Lord. I live for that day. I haven't seen it yet. But people came to me one night and said to me that there was one moment, which was really powerful, and God was there. A Catholic leader of a university came to me later and said it was stuffy and hot in the room. But as we worshipped a cool breeze blew across the audience. He said he looked around to see if there was a fan, but there wasn't one! Another person felt the same thing too. The university leader said it made his hair stand on end and I got so excited to hear that. Those are the moments when healings take place. Nobody has to lay hands on anybody because the presence of God is there to heal."

Earlier in the year Integrity released Moen's 'Rivers Of Joy' album which to these ears sounds like one of the outstanding worship albums of the year. I wondered how others had responded to it. Moen says, "The response has been very good. 'Rivers Of Joy' was received well in England. It was one of the projects that escaped. There was no real marketing plan behind it because it came right between a huge Ron Kenoly album, 'Sing Out With One Voice', and a huge Shalom Jerusalem album. In the middle there was this little album called 'Rivers Of Joy' with Don Moen. It literally got squeezed in between these two mega projects. It's the salami syndrome again - it must be my destiny."

I want the rivers of joy dvd